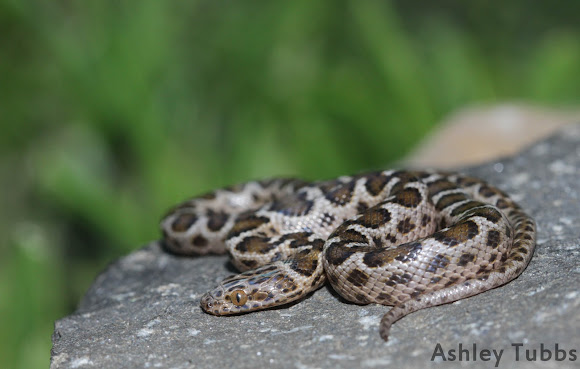 When we first found this snake, we had no idea what it was. We knew it wasn't venomous, but that was about it. We took it back to our lodge and once we pulled out the guides we found him. He has spots all down his back that get broken in half by an invisible vertebral stripe. Almost looks like a baby python :)

Found under a rock at about 7500ft elevation in a rocky area of a grassland. He was returned to the rocks after we ID him and photographed him.

Haha Gilma, yes, they are non-venomous. There is a pretty decent sized group of snakes known as house snakes, I've seen two now. I thought this one was cooler though :)

Non venomous... right Ashley? I was really hoping to see one. Someone else had an entire legion of lizards and snakes in their room. Should have been us ;)

Great series, beautiful snake, AshleyT.
The name "House Snake" is odd, I would not want a venomous, snake at home!!? ; )

Thanks Jemma, Tom, and Cody! If you look close, you'll see how he is flattening his body, which he's good at because he lives in rock crevices and such. But you'll also notice a lump in him from a meal a few days beforehand ;)