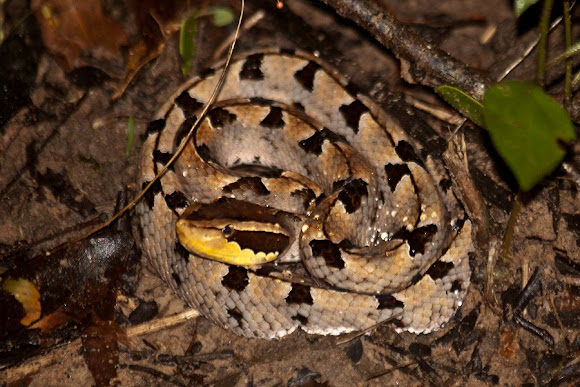 This causes more snake bites in Cambodia than any other snake. It tends to sit perfectly still next to or even on a path waiting in ambush for its prey. Like most snakes it is not aggressive but, unlike most snakes, it often does not always try to escape when it is frightened by humans. Instead, it stays still and hopes the threat will pass. It can be quite stubborn and won't move even if nudged with a stick. I have had to get a stick under one and flick it into the jungle so we could continue along a path. You can walk pass without the snake striking but, if you stray too close or even stand on the snake, it will bite. Thankfully, they tend to use a quick defensive strike that does not inject much, or even any, venom. This gives enough time to seek anti-venom, even in a remote location like ours.

Thanks for trying. It is the same in IE as it was in Chrome. It must be the connection speed, which is pretty slow here.
Gee

It has been sent on to the tech folks, but the consensus is that your best bet is to try a different browser. There is no PN interface here - it uses a direct link to an external photo sharing site. There is nothing "system wise" we can do here.

If it doesn't work with a different browser all i can suggest is to check her connection speed as these are higher res images in the blog whereas the PN ones are reduced in size for faster page loading.

I hope this helps, keep me posted.
Lisa

GeeChartier,
I have forwarded your problem on to the tech people. I am sorry you are such difficulty.
Lisa

I have tried that and it hasn't helped. It appears that all the images from http://i.imgur.com are failing to load, but all those from Project Noah are loading correctly.

It sounds like you might need to clean out your cache. They are displaying fine for me and many others.

Thanks Lisa. I have had a look at the blog and several of the images, including mine, are not displaying.

Congratulations! Your photo has been featured in today’s blog, Snakes! It had to be snakes! http://blog.projectnoah.org/

"sweet" is probably not a word I would use for this snake. See the note I have just added to the post.