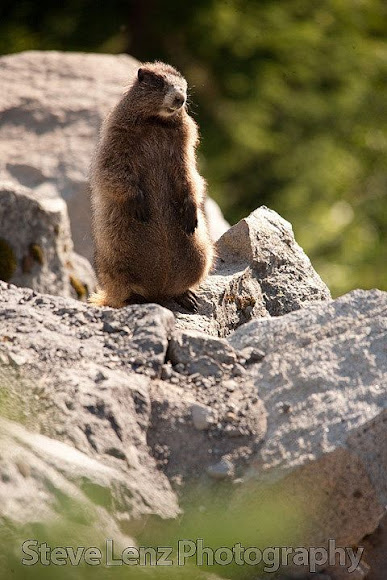 The hoary marmot is a large, bulky, ground squirrel, with short, heavy limbs, and a broad head. Adults range from 62 to 82 cm (24 to 32 in) in total length, including a 17 to 25 cm (6.7 to 9.8 in) tail. The species is sexually dimorphic, with males being significantly larger than females in most subspecies. Because of their long winter hibernation, during which they survive on fat reserves, the weight of the animals varies considerably over the course of the year, from an average of 3.75 kg (8.3 lb) in May to around 7 kg (15 lb) in September, for a fully grown adult.[5] A few fall adults can weigh up to 10 kg (22 lb), with exceptional ones attaining 13.5 kg (30 lb).[6] It is reportedly the largest member of the squirrel family, though the slightly lighter alpine marmot is sometimes titled this as well.[7] (Wikipedia)