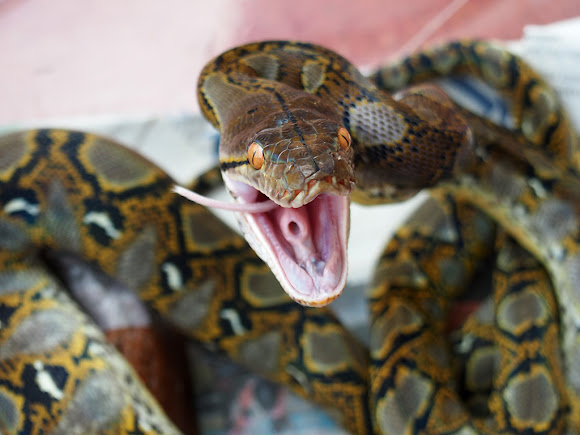 This is captive Retic ( It's mine). Main habit for Reticulatus Python is in South East Asia. They're famous for its growth size. In here (Indonesia), A single Reticulatus Python can grow up more than 10 meters. With famous aggressive character and non-venom but hard binding way to kill prey. They also known as a hard-to-tamed snake as a pet, caused by their natural habits. But in Indonesia, mainly almost 2/3 amateur snake owner start with Reticulatus Python. As a pet, they're well known as a "trash can", because they have a huge appetite, and will swallow a huge number of meal. As picture 1 display my Retic almost done with her meal, just left a mouse tail. As picture 2 display my Retic almost done swalowing a whole mouse. You can see mouse feet and tail almost swallowed.

rain forests, woodlands, and nearby grasslands. It is also associated with rivers and is found in areas with nearby streams and lakes.