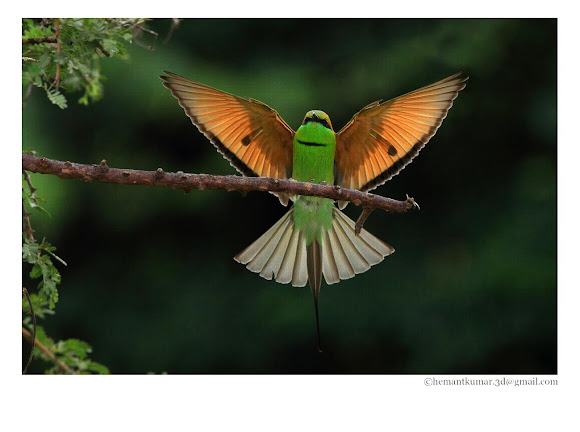 The Green Bee-eater, Merops orientalis, (sometimes Little Green Bee-eater) is a near passerine bird in the bee-eater family. It is resident but prone to seasonal movements and is found widely distributed across sub-Saharan Africa from Senegal and The Gambia to Ethiopia, the Nile valley, western Arabia and Asia through India to Vietnam. They are mainly insect eaters and they are found in grassland, thin scrub and forest often quite far from water. Several regional plumage variations are known and several subspecies have been named.(http://en.wikipedia.org/wiki/Green_Bee-eater)

amazing shot. you must be very lucky!!

HemantKumar, How did you get them to pose like that? Beautiful.

Livan good observation i did not notice it,pic 5 and 6 are shot in different time. need to check about it.

Very beautiful picture. I'm wondering though, what are those 2 apparently shorter feathers with the black dot that show up in the middle of the wings in pic 1??? They don't show up in pics 5 or 6 (assuming these pic are of the same individual, are they? Is it a gender thing?), and I don't see them in any other Internet picture of this bird. Ex: http://www.flickr.com/photos/rracine1/72...

THAT...IS...BEAUTIFUL... and i bet there's more to be discovered!

SPECTACULAR PHOTO! I want to "favorite" it, but I can't!

I Love that it's a really nice pic and beautiful bird

Impressive!. Its a shame we are still on Snake week, I think deserves a SODT