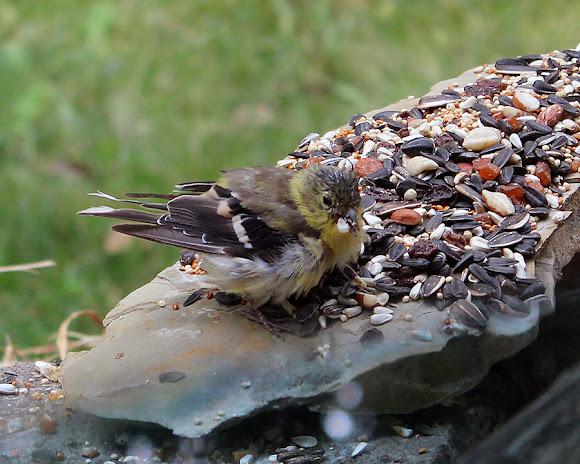 The American Goldfinch is a small finch, 11–14 centimeters (4.3–5.5 in) long, with a wingspan of 19–22 centimeters (7.5–8.7 in). It weighs between 11–20 grams (0.39–0.71 oz).[11] Among standard measurements, the wing chord is 6.5 to 7.8 cm (2.6 to 3.1 in), the tail is 4.2 to 5.1 cm (1.7 to 2.0 in), the culmen is 0.9 to 1.1 cm (0.35 to 0.43 in) and the tarsus is 1.2 to 1.4 cm (0.47 to 0.55 in).[12] The beak is small, conical, and pink for most of the year, but turns bright orange with the spring molt in both sexes.[13] The shape and size of the beak aid in the extraction of seeds from the seed heads of thistles, sunflowers, and other plants.[14] The American Goldfinch undergoes a molt in the spring and autumn. It is the only cardueline finch to undergo a molt twice a year.[15] During the winter molt it sheds all its feathers; in the spring, it sheds all but the wing and tail feathers, which are dark brown in the female and black in the male.[14] The markings on these feathers remain through each molt, with bars on the wings and white under and at the edges of the short, notched tail.[13] The sexual dimorphism displayed in plumage coloration is especially pronounced after the spring molt, when the bright color of the male's summer plumage is needed to attract a mate.[14] American Goldfinch call Once the spring molt is complete, the body of the male is a brilliant lemon yellow, a color produced by carotenoid pigments from plant materials in its diet,[16] with a striking jet black cap and white rump that is visible during flight.[17] The female is mostly brown, lighter on the underside with a yellow bib.[15] After the autumn molt, the bright summer feathers are replaced by duller plumage, becoming buff below and olive-brown above, with a pale yellow face and bib. The autumn plumage is almost identical in both sexes, but the male has yellow shoulder patches.[18] In some winter ranges, the goldfinches lose all traces of yellow, becoming a predominantly medium tan-gray color with an olive tinge evident only on close viewing. The immature American Goldfinch has a dull brown back, and the underside is pale yellow. The shoulders and tail are dull black with buff-colored, rather than white, markings on wings and rump. This coloration is the same in both genders.[18] The song of the American Goldfinch is a series of musical warbles and twitters, often with a long note. A tsee-tsi-tsi-tsit call is often given in flight; it may also be described as per-chic-o-ree.[13] While the female incubates the eggs, she calls to her returning mate with a soft continuous teeteeteeteete sound. The young begin to use a call of chick-kee or chick-wee shortly before fledging, which they use until they have left the nest entirely.[14] There are two defense calls made by adults during nesting; a sweeet call made to rally other goldfinches to the nest and distract predators, and a bearbee used to signal to the nestlings to quiet them and get them to crouch down in the nest to become less conspicuous.[19]

The American Goldfinch prefers open country where weeds thrive, such as fields, meadows, flood plains, as well as roadsides, orchards, and gardens. It may also be found in open deciduous and riparian woodlands and areas of secondary growth.[20] This habitat preference continues during the spring and autumn migrations.[13] The summer breeding range stretches across North America from coast to coast. It is bounded on the north by Saskatchewan and stretches south across North America to North Carolina on the east coast, and northern California on the west coast.[13] The American Goldfinch is a short-distance migrant, moving south in response to colder weather and lessened food supply. The migration is completed in compact flocks, which travel in an erratic, wavelike flight pattern.[21] Its winter range includes southern Canada and stretches south through the United States to parts of Mexico. In winter, in the northern part of its range, the finch may move nearer to feeders if they are available. In southern ranges, during winter, they remain in areas similar to the fields and flood plains where they live during the summer months.[22] Attempts were made to introduce the American Goldfinch into Bermuda in the 19th century, and Tahiti in 1938, but the species failed to become established.[2

Thank you Liam , how do I accept your suggestion ? Seems like the interface has changed or I'm missing something.

A ratty-looking male in transition plumage.