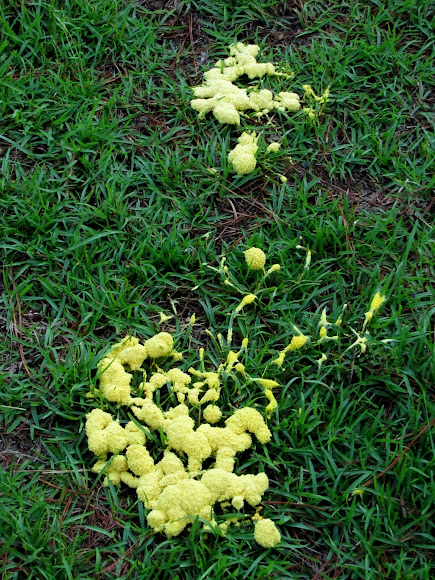 "Fuligo septica is a species of plasmodial slime mold, and a member of the Myxomycetes class. It is commonly known as the dog vomit slime mold or scrambled egg slime because of its peculiar yellowish, bile-colored appearance. A common species with a worldwide distribution, it is often found on bark mulch in urban areas after heavy rain or excessive watering. Their spores are produced on or in aerial sporangia and are spread by wind."

Open area (near a stump, if it helps)

Thanks for the comments and suggestions, guys!
Logan, your suggestion matches best! I was actually debating whether or not to add that this was NOT dog vomit...turns out it is, Dog Vomit Slime Mold. ;D

I did some experiments with this cool organism in my biology classes (I was the teacher.) It is actually individual fungi cells that live together in a "blob".... streaming like a gel. It can even go through silk - one cell at a time, and "reassemble" on the other side! You can see the streaming plasmodium if you stick it under a 40x microscope with good lighting. LOVE it!