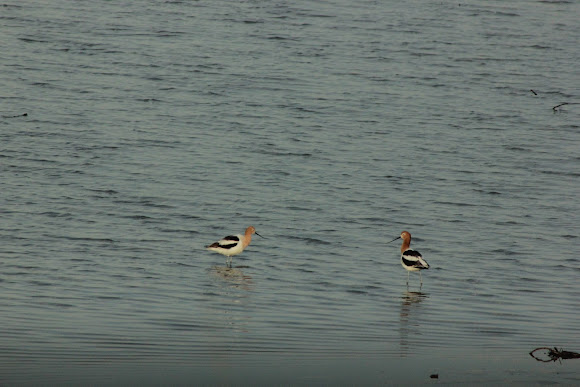 With its elegant profile and striking coloration, the American Avocet is unique among North American birds. In summer it can be found in temporary and unpredictable wetlands across western North America where it swings its long upturned bill through the shallow water to catch small invertebrates.

Populations declined in the 1960s and 1970s, largely from the loss of wetlands from water diversion for human use. Contamination of wetland habitat with selenium caused increased developmental abnormalities and mortality. Since 1995, owners of selenium-contaminated sites in northern California have been required to provide safe wetland habitat for the species. Breeding success on the newly created sites has been much greater than initially expected, but long-term prospects for breeding at these sites are not clear.

I spotted several of these birds in the Cheynne Bottoms in Great Bend Kansas.