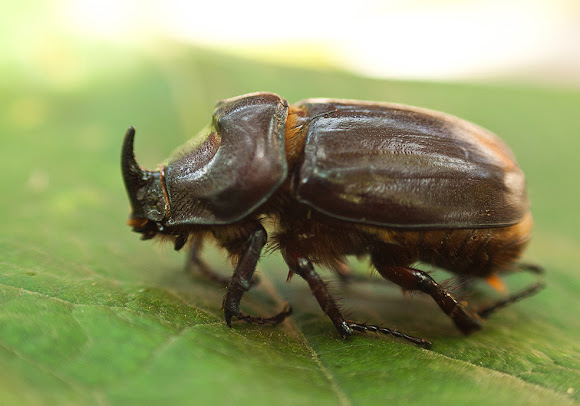 Family: Scarabaeidae Subfamily: Dynastinae Oryctes nasicornis reach a length of 20–40 millimetres (0.79–1.57 in), with a maximum of 47 millimetres (1.9 in). It is one of the largest beetles found in Europe. Elytra are reddish brown with a glazed appearance, while head and pronotum are slightly darker. The underside of the body and the legs are covered with long red hair. It is a sexually dimorphic species. The male's head is topped by a long curved horn (hence its common name), while the females have no horns.

The rhinoceros beetle lives on wood, and the large larvae can be found in rotting wood stumps and around sawdust. At the margin of its distribution, the beetle is often found in connection with sawmills and horse racing tracks.

He was either kinda lazy or dying, moved very little. It's active mostly during the evening, so this could be another reason, I guess.