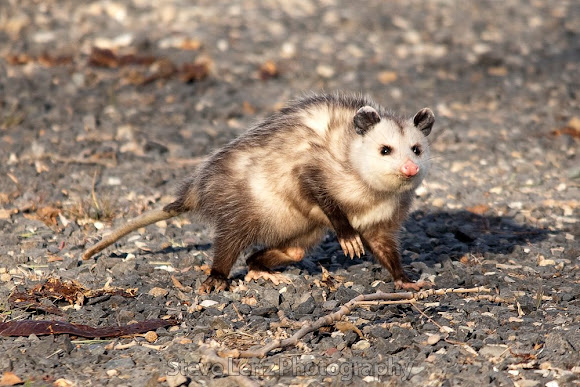 Opossums (colloquially possums) (Didelphimorphia, /daɪˌdɛlfɨˈmɔrfiə/) make up the largest order of marsupials in the Western Hemisphere, including 103 or more species in 19 genera. They are also commonly called possums, though that term technically refers to Australian fauna of the suborder Phalangeriformes. The Virginia opossum was the first animal to be named an opossum; usage of the name was published in 1610.[2] The word opossum was borrowed from the Virginia Algonquian (Powhattan) language in the form aposoum and ultimately derives from the Proto-Algonquian word *wa˙p- aʔθemw, meaning "white dog" or "white beast/animal".[3] Opossums probably diverged from the basic South American marsupials in the late Cretaceous or early Paleocene. Their unspecialized biology, flexible diet and reproductive strategy make them successful colonizers and survivors in diverse locations and conditions.[citation needed] (Wikipedia)

Great shot and subject, But this should be under "Mammals" not "Other".