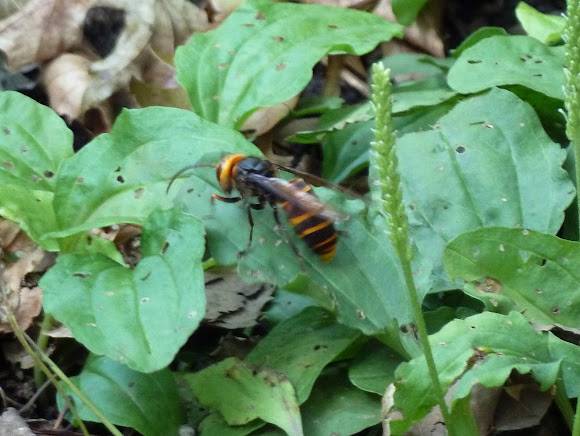 It is a large insect and adults can be more than 4 centimetres (1.6 in) long, with a wingspan greater than 6 centimetres (2.4 in). It has a large yellow head with large eyes, and a dark brown thorax with an abdomen banded in brown and yellow.

Endemic to the Japanese islands, where it prefers rural areas where it can find trees to nest in.

In Japan it is known as the o-suzumebachi (オオスズメバチ / 大雀蜂 / 大胡蜂, literally "Giant Sparrow Bee"). Being stung is extremely painful and requires hospital treatment. On average 40 people die every year of anaphylactic shock after having been stung, which makes the Japanese giant hornet the most lethal animal in Japan (bears kill about ten people and venomous snakes kill five to ten people each year).

Wow I though they just looked dangerous and now reading what you have just said they seem even more scary !

Thanks for the ID Reza Hashemizadeh! Around 40 people die every year of anaphylactic shock having been stung by the Japanese giant hornet - I won't get so close next time!