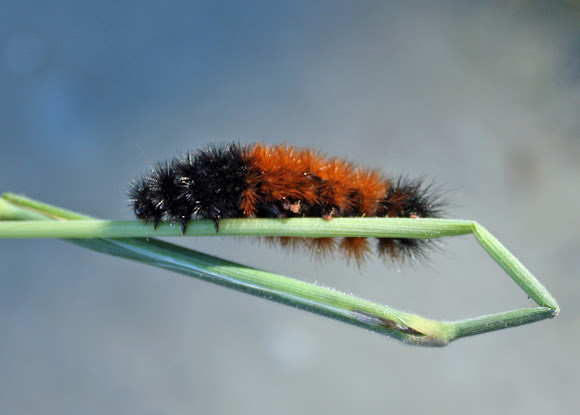 Spotted on a bike/walking path in Colony Farm Regional Park, Port Coquitlam, BC, Canada. I had seen several casualties that had been crushed by bikes, which prompted me to pick this one up and deposit in the grassy shoulder.

Range is southern Canada, throughout the United States, and into Mexico. Adult Woollybear moths are active from late winter through late fall, are nocturnal and attracted to lights. Also called Isabella tiger moth. The woollybear caterpillar feeds on grasses.

Legend has it that the caterpillar predicts how cold/mild a winter will be: a wide orange band means a mild winter: the more narrow, the colder.

Hi Gerry! Would you like to join my new mission Moths and Butterflies of the Pacific Northwest and add your spottings to it? Thanks!
http://www.projectnoah.org/missions/3073...

You are talking my language. Nice series!