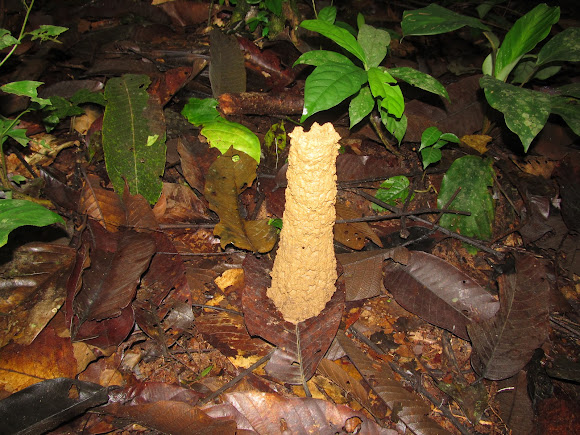 Cicadas make up the superfamily Cicadoidea and are part of the Hemiptera order, or true bugs. This chimney, or turret, was 28 cm tall and had an opening 2 cm. across It was made from yellowish clay and still had the appearance of being fresh, however, as it was located in an area where everything was damp to wet, there was no way to tell how old it was. The texture of the mud and edge of the hole were very sharp, like they hadn't survived many rains. I wasn't able to find that the species, or even genus of a cicada, can be discerned from the chimney it makes.

This cicada chimney was found on the banks of the Makuma River (600 masl) in the Amazon rainforest of SE Ecuador. Although it was above the flood line from the river, it was in a low-lying area that would be subject to gathering water and local flooding after heavy rains, which are quite common.

When it is time for the cicada nypmphs to leave their burrow where they've been sucking the juice from roots of trees, many only make holes in the surface from which to emerge, however those nymphs that burrow down in low-lying areas that are at risk to local flooding will make a chimney, or turret, above their burrow. This keeps water and mud from clogging the opening or drowning them out. It is a great example of animal architecture. From this elevated tower, they will emerge. According to a pest-control website <https://www.actionpest.com/blog/post/cic...>, by the time you see these chimneys, chances are the cicada is already gone, so I assume they are built shortly before the cicadas emerge.

Well Lauren, I see I ignored (or didn't know about) your comment. Either way, I appreciate your comments. Thanks.

Fascinating, I didn't know some Cicadas made Chimneys!

Thanks Leuba. That's the nice thing about PN. Many times it has pushed me to look something up. I believe that's called "learning" and I'm having a good time doing that here on this site :-)

Great spotting ! Thanks for sharing this (photo and information) Tukup - all new & fascinating to me. Your spotting made me look for more information and I found an interesting journal article about cicada nymphs, chimneys and feeding habits.

I wish I could tell something more about the critter that made it, but so far I haven't found anything. Thanks Mauna.

I've never gotten to see one of these before. Wow.