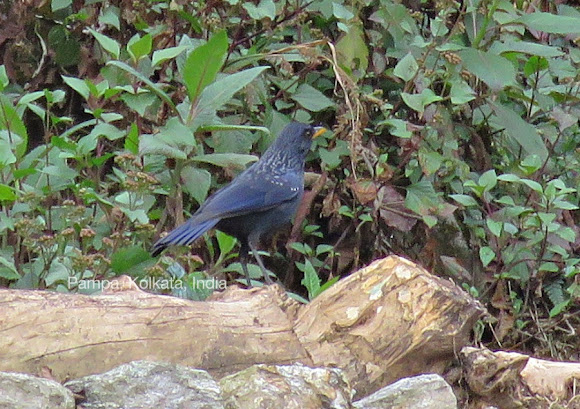 It is brightly coloured in dark violet blue with shiny spangling on the tips of the body feathers other than on the lores, abdomen and under the tail. The wing coverts are a slightly different shade of blue and the median coverts have white spots at their tips. The bill is yellow and stands in contrast. Female more brownish. It is known for its loud human-like whistling song at dawn and dusk.They are active well after dusk and during the breeding season (April to August) they tend to sing during the darkness of dawn and dusk when few other birds are calling. The call precedes sunrise the most during November. The blue whistling thrush is usually found singly or in pairs.

They are found along the Himalayas in the Indian subcontinent and extending into Southeast Asia. It is found in temperate forestsand subtropical or tropical moist montane forests. They make altitudinal movements in the Himalayas, descending in winter.Like others in the genus, they feed on the ground, often along streams and in damp places foraging for snails, crabs, fruits and insects. They are insectivorous and omnivorous. The blue whistling thrush is usually found singly or in pairs. They hop on rocks and move about in quick spurts. They turn over leaves and small stones, cocking their head and checking for movements of prey.