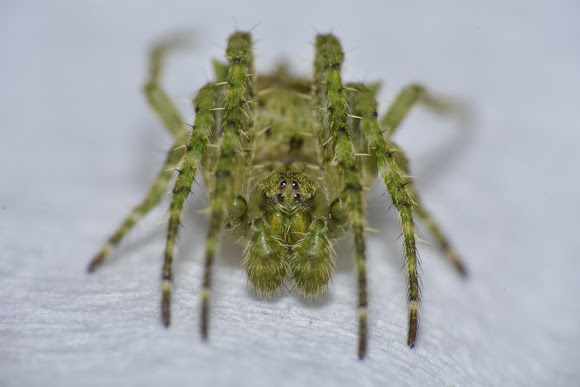 Small green spider, not only hairy, but spiny on its legs. Size is less than 1 cm.

Saw it during a night walk. When I first saw it (Pic #2), my lights attracts some flying insects and some of them got tangled in the Spider's web (Pic#3). This Stink Bug was too big and strong for the Spider's web. As the Spider confront the Stink Bug, the Bug struggled vigorously and tried to fly (and managed to get away) but in the process, damaged the Spider's webbings. This caused the Spider to drop to the ground, which I collected and places on paper towel to take the close-up shots (Pic#1 & Pic#4).

Thanks, @Desmond and @venus :)

just terrific...I have never seen something as terrifying yet amazing as this spider!