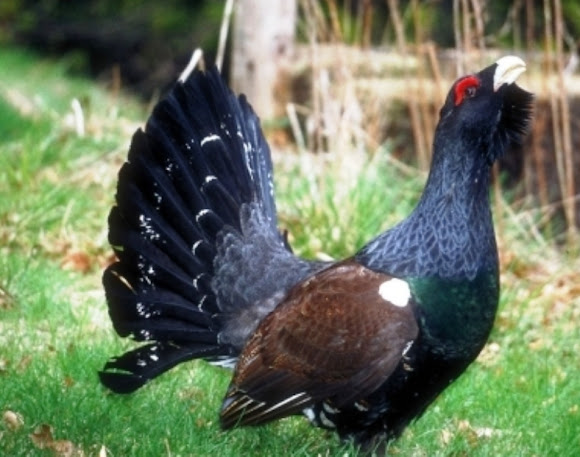 Male and female Western Capercaillie – the cocks and the hens – can easily be differentiated by their size and colouration. The male bird (or cock) is much bigger than the female (or hen). Cocks typically range from 74 to 85 cm (29 to 35 in) in length with wingspan of 90 to 125 cm (34–49 in) and an average weight of 4.1 kg (9.0 lb).[3][4] The larger wild cocks can attain a length of 100 cm (39 in) and weight of 6.7 kg (15 lb).[5] The largest specimen ever recorded in captivity had a weight of 7.2 kg. (15.9 lbs). The body feathers are coloured dark grey to dark brown, while the breast feathers are dark metallic green. The belly and undertail coverts vary from black to white depending on race (see below). The hen is much smaller, weighing about half as much as the cock. The hen's body from beak to tail is approximately 54–64 cm (21–25 in) long, the wingspan is 70 cm (28 in) and weighs 1.5-2.5 kg (3.3-5.5 lbs). Feathers on the upper parts are brown with black and silver barring, on the underside they are more light and buffish-yellow. Both sexes have a white spot on the wing bow. They have feathered legs, especially in the cold season for protection against cold. Their toe rows of small, elongated horn tacks provide a snowshoe effect that led to the German family name "Rauhfußhühner", literally translated as "rough feet chickens". These so-called "courting tacks" make a clear track in the snow in winter. Both sexes can be distinguished very easily by the size of their footprints. There is a bright red spot of naked skin above each eye. In German hunters' language, these are the so-called "roses". The small chicks resemble the hen in their cryptic colouration, which is a passive protection against predators. Additionally, they wear black crown feathers. At an age of about 3 months, in late summer, they moult gradually towards the adult plumage of cocks and hens. The eggs are about the same size and form as chicken eggs, but are more speckled with brown spots.

It is a sedentary species, breeding across northern parts of Europe and western and central Asia in mature conifer forests with diverse species composition and a relatively open canopy structure. At one time it could be found in all the taiga forests of northern and northeastern Eurasia within the cold temperate latitudes and the coniferous forest belt in the mountain ranges of warm temperate Europe. The Scottish population became extinct, but has been reintroduced from the Swedish population; in Germany it is on the "Red list" as a species threatened by extinction, and is no longer found in the lower mountainous areas of Bavaria; in the Bavarian Forest, the Black Forest and the Harz mountains numbers of surviving Western Capercaillie decline even under massive efforts to breed them in captivity and release them into the wild; and in Switzerland, in the Swiss Alps and in the Jura. The species is extinct in Belgium. In Ireland it was common until the seventeenth century, but died out in the eighteenth. In Norway, Sweden, Finland, Russia and Romania populations are quite big, and it's quite a common bird to see in the forested regions of these countries. The most serious threats to the species are habitat degradation, particularly conversion of diverse native forest into often single-species timber plantations, and to birds colliding with fences erected to keep deer out of young plantations. Increased numbers of small predators that predate capercaillies (e.g. Red Fox) due to the loss of large predators who control smaller carnivores (e.g. Gray Wolf, Brown Bear) also cause problems in some areas. In Sweden, Western Capercaillies are the primary prey of the Golden Eagle.[6] In some areas, declines are due to excessive hunting, though game laws in many areas have stopped this. It has not been hunted in Scotland or Germany for over 30 years. Western Capercaillies are not elegant fliers due to their body weight and short, rounded wings. While taking off they produce a sudden thundering noise that deters predators. Because of their body size and wing span they avoid young and dense forests when flying. While flying they rest in short gliding phases. Their feathers produce a whistling sound.