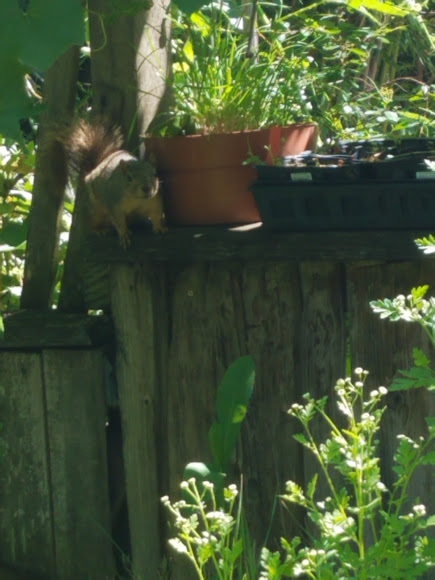 The fox squirrel (Sciurus niger), also known as the eastern fox squirrel or Bryant's fox squirrel, is the largest species of tree squirrel native to North America. Despite the differences in size and coloration, they are sometimes mistaken for American red squirrels or eastern gray squirrels in areas where the species co-exist Food habits of fox squirrels depend largely on geographic location. In general, fox squirrel foods, include acorns, tree buds, insects, tubers, bulbs, roots, bird eggs, seeds of pines and spring-fruiting trees, and fungi. Agricultural crops such as corn, soybeans, oats, wheat, and fruit are also eaten. Insects on occasion. Fox squirrels are strictly diurnal, non-territorial, and spend more of their time on the ground than most other tree squirrels. They are still, however, agile climbers. They construct two types of homes called "dreys", depending on the season. Summer dreys are often little more than platforms of sticks high in the branches of trees, while winter dens are usually hollowed out of tree trunks by a succession of occupants over as many as 30 years. Cohabitation of these dens is not uncommon, particularly among breeding pairs. Fox squirrels will form caches by burying food items for later consumption. They like to store foods that are shelled and high in fat, such as acorns and nuts. Shelled foods are favored because they are less likely to spoil than non-shelled foods, and fatty foods are valued for their high energy density. -Wikipedia