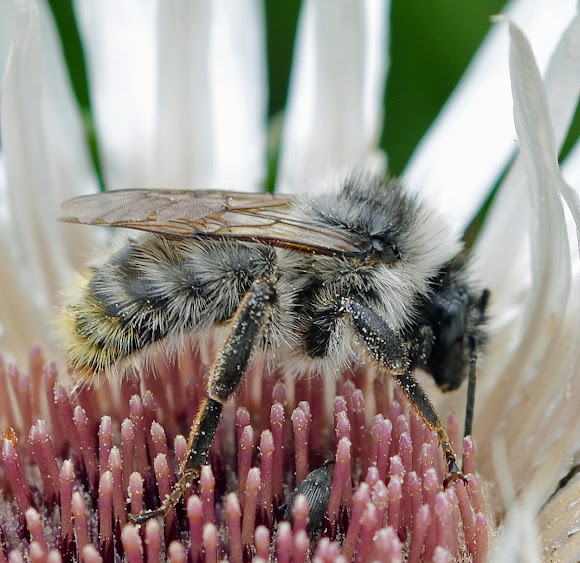 The male of this bumblebee species is black and white with a touch of yellow on the tip of the abdomen. It is about 20 mm long. Thanks to ForestDragon for ID!

From the reference: "Bombus mesomelas belongs to the pomorum-group (formerly sg. Rhodobombus). Within the West-Palaearctic region, Bombus mesomelas is a species from the southern mountains. Bombus mesomelas mesomelas is found in the Cordillera Cantabrica (Spain), the Pyrenees, the Alps, the Appennino Mts., the Tatras Mts., the Krkonoše Mts. (Czechia) and the Carpathians. The range of Bombus mesomelas alboluteus is discontinuous, with a western population in the mountains of S. Bosnia, Yugoslavia and the Balkan and an eastern population in E. Anatolia, the Caucasus, Transcaucasia and N. Iran. In the north of its range, mesomelas has been found in the hills and lower mountains of Thüringen (Austria), S. Poland and Bohemia (Czec Republic). All these findings are ancient. In the Cordillera Cantabrica, the Pyrenees, the western and central Alps, the species is quite common. On the contrary, in the eastern Alps and in the mountains of central-east and eastern Europe, as well as in Iran, mesomelas is uncommon and its distribution is patchy".

venation on the wings offers a lot of clues for ID.

aaah, I see them - we got similar ones, Monkey beetles I think.

Thanks Deziree! Only after I looked at the images on a large screen did I notice the tiny beetle on the first shot:-)

Great images! so much hair!