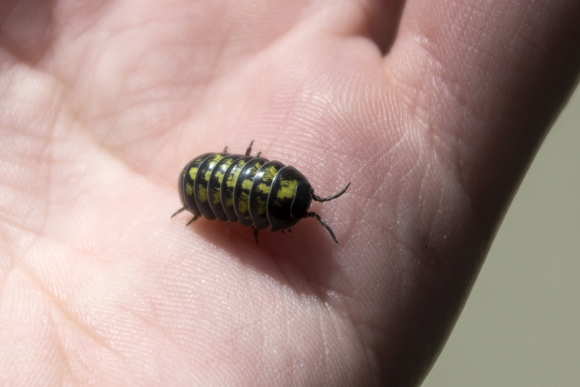 From Encyclopedia of Life: "Woodlice feed on dead organic matter, which they detect by means of taste and smell. During the breeding season, reproductive females develop a 'brood pouch', which consists of overlapping leaf-like structures known as 'oostegites', that form a 'false floor' below the body. The fertilised eggs pass into this fluid-filled chamber, and the young crawl out of the brood pouch when they are fully developed. Woodlice undergo a series of moults before reaching maturity, growing at each stage; the stages between these moults are known as 'stadia', and are generally similar in structure and appearance. Mature woodlice continue to moult. Prior to moulting, the calcium contained in the old cuticle is removed and stored as conspicuous white blotches, these blotches disappear after moulting as the calcium is used to reinforce the new cuticle. The rear part of the body moults a few days before the front half, and occasionally woodlice may be seen with half a pinkish body and half a 'usual' grey body for this reason. The discarded cuticle is frequently eaten by the newly moulted woodlouse "