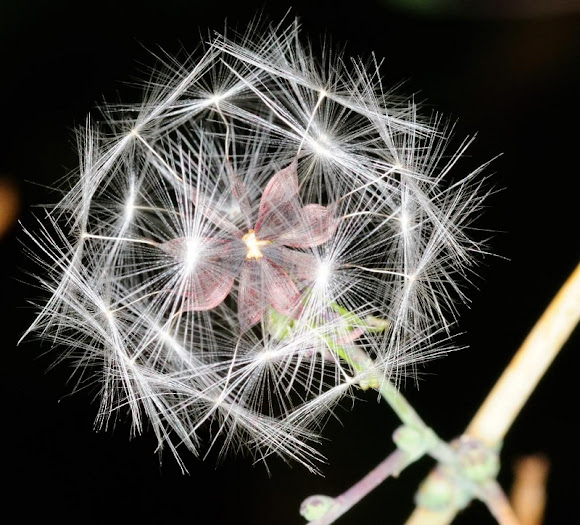 Lactuca virosa is a plant ingested often for its mild psychotropic (specifically hypnotic or sedative) effects which are often described as being similar to that of opium. It is related to common lettuce (L. sativa). It is taller than prickly lettuce Lactuca serriola (up to 200 cm) although very similar. The achene is purple black, without bristles at the tip. The leaves grow along a spiny stem and get progressively smaller as they reach its top. They emit latex when cut. Many flowers are produced and usually appear in the upper part of the plant. It has a hairless reddish stem, containing a milky latex, growing up to 200cm. The leaves are oblong lanceolate, often pinnated (especially for the lower leaves), waxy grey green. Fine spines are along the edges. The undersides have whitish veins. The flower heads are 11 to 13mm wide, are pale yellow, often tinged purple. The bracts are also often tinged purple. It flowers from July until September.

Spotted at the edge of a local road

The plant can be eaten as a salad, although it has something of a bitter taste. Young leaves can be eaten raw or cooked. The Ancient Greeks called the lettuce eunuch because it caused urination and relaxed sexual desire.

Thanks J, You really have an impressive collection

Thanks asergio, you are very nice

Congratulations on your wonderful spotting and SOTD arlanda!

Congratulations on a wonderful series! You have a great collection!

Thanks Marylsis, maybe I should have tried, hahaha:))))

interesting info!! thank you for that. I think I have heard of this being put into smoking blends....I wonder if it even works that way for the desired effects..??:)

Congrats on your SOTD!
Preciosa foto :)

Actually Joshua, I would say that in this case the beauty comes from the symmetry, in some way the opposit to crazyness

You are right Karen, it should be eaten regularly by most of us!! :))))

Thanks Atul, you are very nice