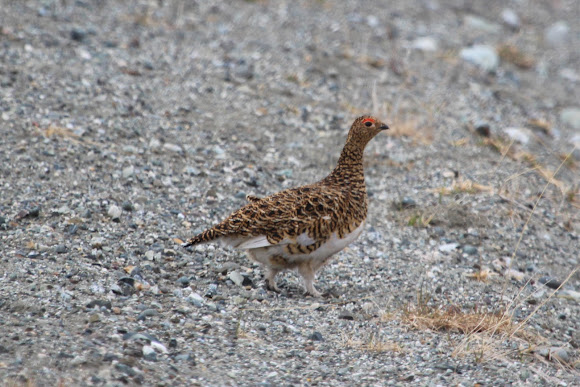 This is the Alaska state bird! A breeding female to go with the male that I spotted last week at http://www.projectnoah.org/spottings/471... From Wikipedia: The willow ptarmigan is a medium to large ground-dwelling bird and is the most numerous of the three species of ptarmigan. Males and females are about the same size, the adult length varying between 35 and 44 centimetres (14 and 17 in) with a wingspan ranging from 60 and 65 centimetres (24 and 26 in). The weight is 430 to 810 grams (15 to 29 oz). It is deep-chested and has a fairly long neck, a broad bill, short feathered legs and a moderately short rounded tail. In the summer, the male's plumage is marbled brown, with a reddish hue to the neck and breast, a black tail and white wings and underparts. It has two inconspicuous wattles above the eyes, which become red and prominent in the breeding season. The female is similar in appearance but lacks the wattles and has brown feathers scattered among the white feathers on the belly. During winter, the plumage of both sexes becomes completely white, except for some black feathers in the tail. Immature birds resemble the adults.

Below the treeline in semi-barren forests or scrublands.