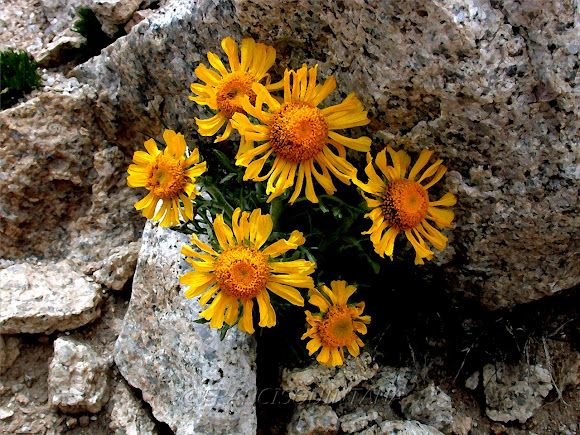 An exceedingly large and widespread family of Angiospermae. The group has more than 23,000 currently accepted species, spread across 1620 genera and 12 subfamilies. In terms of numbers of species, Asteraceae is rivaled only by Orchidaceae. (Which of the two families is actually larger is unclear, owing to uncertainty about exactly how many species exist in each family). The main feature of the family is the composite flower type in the form of capitula surrounded by involucral bracts.The name "Asteraceae" comes from Aster, the most prominent generum in the family, that derives from the Greek ἀστήρ meaning star, and is connected with its inflorescence star form. As for the term "Compositae", more ancient but still valid, it obviously makes reference to the fact that the family is one of the few angiosperms that have composite flowers. This family has a remarkable ecological and economical importance, and is present from the polar regions to the tropics, colonizing all available habitats. The Asteraceae may represent as much as 10% of autochthon flora in many regions of the world.

Most members of Asteraceae are herbaceous, but a significant number are also shrubs, vines and trees. The family has a worldwide distribution, and is most common in the arid and semi-arid regions of subtropical and lower temperate latitudes

Asteraceae is an economically important family. Some members provide products including cooking oils, lettuce, sunflower seeds, artichokes, sweetening agents, coffee substitutes and teas. Several genera are popular with the horticultural community, including marigold, pot marigold (also known as calendula), cone flowers, various daisies, fleabane, chrysanthemums, dahlias, zinnias, and heleniums. Asteraceae are important in herbal medicine, including Grindelia, echinacea, yarrow and many others. A number of species have come to be considered invasive, including, most notably in North America, dandelion, which was originally introduced by European settlers who used the young leaves as a salad green.

Beauty between the rocks! Nice spotting! :-)