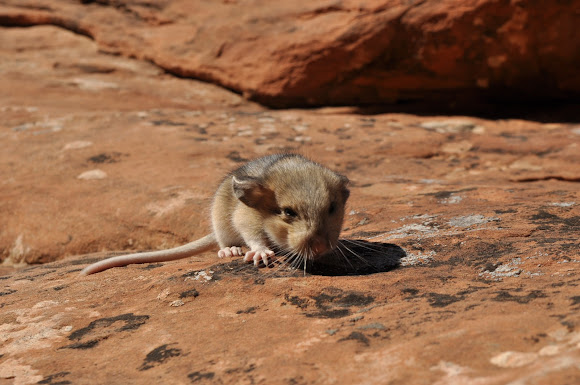 The desert woodrat, Neotoma lepida, occurs in parts of Oregon, Idaho, California, Nevada, Utah, and Baja California. The species is common in western Utah, where it inhabits rocky slopes and desert areas with sparse vegetation. The species is similar, if not identical, in appearance to the Arizona woodrat, Neotoma devia, which occurs in southeastern Utah. In fact, the Arizona woodrat and desert woodrat were considered to be the same species until recent evidence proved otherwise. Desert woodrats are primarily nocturnal, retreating to dens constructed of debris among rocks and/or vegetation when inactive during the day. Females are very prolific, and may have more than four litters of one to five young each year. Desert woodrats eat a variety of plant material, such as seeds, fruits, and leaves. As is the case with all woodrats, desert woodrats have hair on their tails, which distinguishes them from Old World rats.

The species is nocturnal so seeing him during the day was odd. He was crying too - looking for his mom? This little guy was on the trail - did a raptor drop him? - not sure Arches National Park Utah

Such a cute little fellow! It saddens me that something wrong was up with him.
Lovely picture though, good spotting.

This is a lovely and interesting spotting. To make it complete, and useful to researchers using this site for data, please edit this and add a reference (Wikipedia, Encyclopedia of Life, something else) about this species in the reference field of your spotting. Please do this for each photo you post. Thanks for helping to make Project Noah a complete reference tool for scientists.
Also, if he was out during the day when he shouldn't have been, chances are he was ill (Hanta virus?)