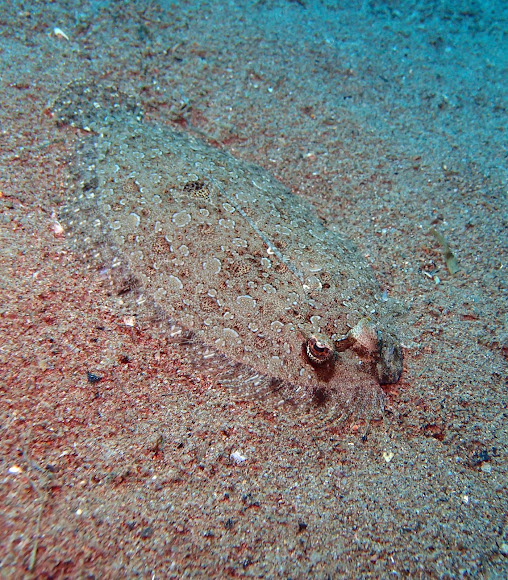 The leopard flounder is a highly compressed fish up to 39 centimeters (15 in) long, one of the lefteye flounders, meaning that the right eye has migrated to the left side of the body. The eyed side shows dark spots, blotches and rings. One broader dark blotch is located on middle of the straight section ofthe lateral line. The male has an elongate pectoral fin which signals in courtship or territorial displays and when alarmed. Leopard flounders use color to camouflage themselves. Bothus pantherinus takes on dull, spotted coloring to blend in with the rocky seafloor. It waits for its prey to swim by. Other times the flounder turns an almost see-through color to avoid predators when swimming near the surface.

Is a flatfish found in wide range of the Pacific and Indian Oceans. Leopard flounder is a benthis species living on the bottom of a sea. It inhabits sandy or silty sand, and muddy bottoms of inner reef flats. It is often partially buried in or on the sand of lagoons, bays and sheltered reefs, at a depth of 3–150 metres (9.8–490 ft).

and ita has pretty eyes, if you notice :-)