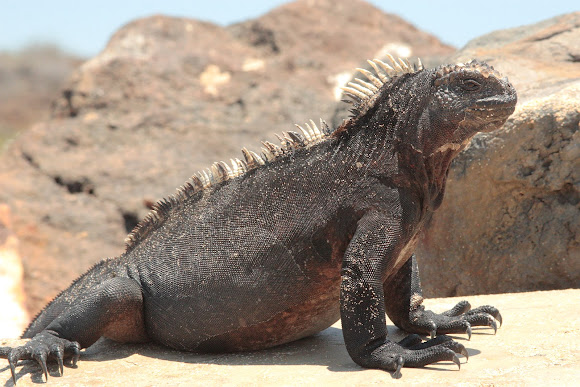 As an ectothermic animal, the marine iguana can spend only a limited time in cold water diving for algae. Dives of more than 15 m may last up to half an hour.[4] Afterwards it basks in the sun to warm up. Until it can do so it is unable to move effectively, making it vulnerable to predation. Marine iguanas become highly defensive when in this state, biting at potential threats. During the breeding season males assemble large harems of females, which they guard aggressively against rivals. Marine iguanas have been found to change their size to adapt to varying food conditions. During an El Niño cycle in which food diminished for two years, some were found to decrease their length by as much as 20%. When food supply returned to normal, iguana size followed suit. It is speculated that the bones of the iguanas actually shorten as shrinkage of connective tissue could only account for a 10% change in length.[5] Research suggests iguanas secrete a stress hormone that induces decreased skeletal size

Great photo I love it. Marine iguanas are amazing creatures and there are so photo ops in Galapagos

Sunbathing. :-) It must be exciting to spot this amazing creature! Nice spotting!