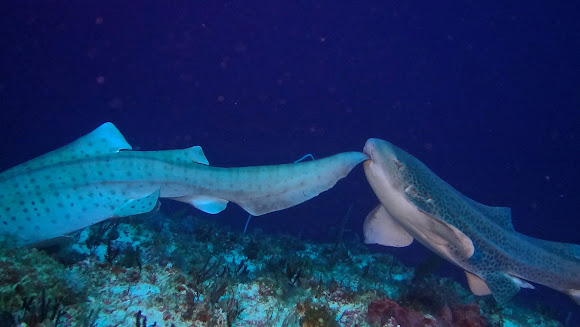 This was an amazing encounter for me and my friends during our dives in Sipadan Island, Malaysia. Our Dive guide called out to us when he first saw the Female Shark, thinking it was dead as it was lying upside down with her white belly exposed and not moving like she was in a state of tonic immobility (http://simple.wikipedia.org/wiki/Tonic_i...). The Male Shark was not seen right away even though he was biting the tail of the Female, as it was upright, their brown body with black spots was good camouflage among the coral rubbles. Then, the Male makes nibbling sort of bites on the tail of the Female and she started to move. The Male Shark did not let go of his bite at all throughout the whole encounter. I spent nearly 5 minutes observing them as they swam away and actually 'fall' down the wall. Fortunately, there was a ledge at around 45 meters and I was able to stay a while more to enjoy this encounter :) There can be some confusion with the name of this specie as the official name is Zebra Shark but they look more like a Leopard with the brown body and spots on their body. However, this confusion is due to the Juvenile phase of the specie, where they will look more like a Zebra with black stripes instead of spots. The zebra shark (Stegostoma fasciatum) is a species of carpet shark and the sole member of the family Stegostomatidae. It is found throughout the tropical Indo-Pacific, frequenting coral reefs and sandy flats to a depth of 62 m (210 ft). Adult zebra sharks are distinctive in appearance, with five longitudinal ridges on a cylindrical body, a low caudal fin comprising nearly half the total length, and a pattern of dark spots on a pale background. Young zebra sharks under 50–90 cm (20–35 in) long have a completely different pattern, consisting of light vertical stripes on a brown background, and lack the ridges. This species attains a length of 2.5 m (8.2 ft). Zebra sharks are nocturnal and spend most of the day resting motionless on the sea floor. At night, they actively hunt for molluscs, crustaceans, small bony fishes, and possibly sea snakes inside holes and crevices in the reef. Though solitary for most of the year, they form large seasonal aggregations. The zebra shark is oviparous: females produce several dozen large egg capsules, which they anchor to underwater structures via adhesive tendrils. Innocuous to humans and hardy in captivity, zebra sharks are popular subjects of ecotourism dives and public aquaria. The World Conservation Union has assessed this species as Vulnerable worldwide, as it is taken by commercial fisheries across most of its range (except off Australia) for meat, fins, and liver oil. There is evidence that its numbers are dwindling.

The zebra shark occurs in the tropical waters of the Indo-Pacific region, from South Africa to the Red Sea and the Persian Gulf (including Madagascar and the Maldives), to India and Southeast Asia (including Indonesia, Malaysia, the Philippines, and Palau), northward to Taiwan and Japan, eastward to New Caledonia and Tonga, and southward to northern Australia. Bottom-dwelling in nature, the zebra shark is found from the intertidal zone to a depth of 62 m (210 ft) over the continental and insular shelves. Adults and large juveniles frequent coral reefs, rubble, and sandy areas. There are unsubstantiated reports of this species from fresh water in the Philippines. Zebra sharks sometimes cross oceanic waters to reach isolated seamounts. Movements of up to 140 km (87 mi) have been recorded for individual sharks. However, genetic data indicates that there is little exchange between populations of zebra sharks, even if their ranges are contiguous

The location of this Spotting shows it is in Indonesia but it should be in Malaysia Pic#1, #3 & #4 shows the Male Shark biting the tail of the Female Shark Pic#2 shows the Female resting on the bottom as the Male Shark still clings on to her tail. The video shows when we newly saw the pair of Sharks.

Yes, @Desmond, this was an awesome encounter with the Leopard Sharks :)

Thanks, @maximoz1.
The tail biting is part of the courting ritual before the act of mating.

You are welcome, @andrew.
Hope you get to see them in one of your dives in the near future :)

Thanks Albert for the information. Amazing video and amazing spotting!

@andrew - I think the tail biting by the Male puts the Female into a trance, like tonic immobility. You can see in the video, at times, she is like motionless.

Why do you think that the male was bitting the tail of the female?