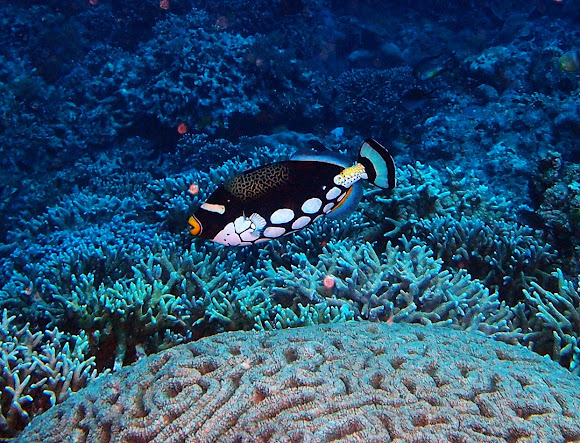 is a triggerfish from the order Tetraodontiformes. The fish can reach up to about 50 cm (20 in) in length. It has strong jaws which are used to crush and eat sea urchins, crustaceans and hard-shelled mollusks. This fish has unique coloration. The ventral surface has large, white spots on a dark background, and its dorsal surface has black spots on yellow. There is a vertical, white (slightly yellow) stripe on the caudal fin. The brightly painted yellow mouth may be used to deter potential predators. This fish has a form of camouflage that is, or is similar to, countershading. From below, the white spots look like the surface of the water above it. From above, the fish will blend in more with the coral reef environment.

This species is a primarily marine species, and is found in tropical Indo-Pacific coastal waters from 1-75 metres in depth (3-250 ft). This fish is generally uncommon or rare throughout its range, which includes East Africa to South Africa, through to Indonesia, and all the way to Japan and New Caledonia. The clown triggerfish is most commonly found around coral reefs. It lives in clear coastal to outer reef habitats. Juveniles are rarely seen because they shelter in caves and crevices below 25m.

It's always been a dream of mine to experience the joy of scuba diving in tropical areas. This is one amazing fish!