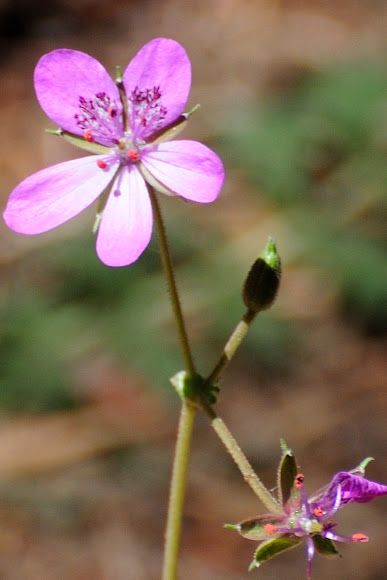 Herbaceous annual plant, and in warm climates a biennial member of the Geranium Family of flowering plants. It is native to the Mediterranean Basin and was introduced to North America in the eighteenth century, where it has since become invasive. The entire plant is edible with a flavor similar to sharp parsley if picked young. It is a hairy, sticky annual. The stems bear bright pink flowers, arranged in loose cluster, and often have dark spots on the bases. The leaves are pinnate and fern-like, and the long seed-pod, shaped very much like the bill of a stork, bursts open in a spiral when ripe, sending the seeds (which have little feathery parachutes attached) into the air.