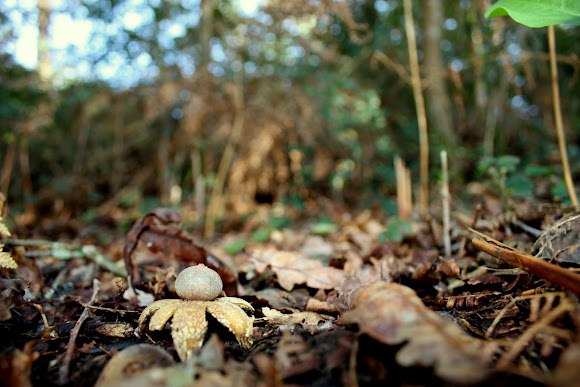 Young specimens of A. hygrometricus have roughly spherical fruit bodies that typically start their development partially embedded in the substrate. A smooth whitish mycelial layer covers the fruit body, and may be partially encrusted with debris. As the fruit body matures, the mycelial layer tears away, and the outer tissue layer, the exoperidium, breaks open in a star-shaped (stellate) pattern to form 4–20 irregular "rays". This simultaneously pushes the fruit body above ground to reveal a round spore case enclosed in a thin papery endoperidium. The rays open and close in response to levels of moisture in the environment, opening up in high humidity, and closing when the air is dry.This is possible because the exoperidium is made of several different layers of tissue; the innermost, fibrous layer is hygroscopic, and curls or uncurls the entire ray as it loses or gains moisture from its surroundings.This adaptation enables the fruit body to disperse spores at times of optimum moisture, and reduce evaporation during dry periods. Further, dry fruit bodies with the rays curled up may be readily blown about by the wind, allowing them to scatter spores from the pore as they roll. "This veritable barometer is the most theatrical of all the earthstars. A few minutes immersion in water will open up old, dried-up specimens that seem as tightly closed as clenched fists." David Arora in Mushrooms Demystified The fruit body is 1–8 cm (0.4–3.1 in) in diameter from tip to tip when expanded. The exoperidium is thick, and the rays are typically areolate (divided into small areas by cracks and crevices) on the upper surface,and are dark grey to black. The spore case is sessile (lacking a stalk), light gray to tan color and 1 to 3 cm (0.4 to 1.2 in) broad with a felt-like or scurfy (coated with loose scaly crust) surface; the top of the spore case is opened by an irregular slit, tear or pore. The interior of the spore case, the gleba, is white and solid when young, and divided into oval locules—a characteristic that helps to distinguish it from Geastrum. The gleba becomes brown and powdery as the specimen matures.Small dark hairlike threads (rhizomorphs) extend from the base of the fruit body into the substrate. The rhizomorphs are fragile, and often break off after maturity. Mature fruit body (left); cross-section of young fruit body (right) The spores are spherical or nearly so, reddish-brown, thick-walled and verrucose (covered with warts and spines). The spores' dimensions are 7–11 µm; the warts are about 1 µm long.The spores are non-amyloid, and will not stain with iodine from Melzer's reagent. The use of scanning electron microscopy has shown that the spines are 0.90–1.45 µm long, rounded at the tip, narrow, tapered, and sometime joined together at the top. The capillitia (masses of thread-like sterile fibers dispersed among the spores) are branched, 3.5–6.5 µm in diameter, and hyaline (translucent). The basidia (spore-bearing cells) are four- to eight-spored,with very short sterigmata.The basidia are arranged in long strings of clusters; individual basidia measure 11–15 by 18–24 µm. The threads of the capillitia arise from the inner surface of the peridium, and are thick-walled, long, interwoven, and branched, measuring 3–5.5 µm thick. The exoperidium (the outer layer of tissue, comprising the rays) is made of four distinct layers of tissue: the mycelial layer contains branched hyphae that are 4–6 μm in diameter; the hyphae of the fibrous layer are 6–8 μm diameter and branched; the collenchyma-type layer has branched hyphae of 3–4 μm diameter; the soft layer contains hyphae that are 3–6 μm in diameter.

The species has a cosmopolitan distribution except for arctic, alpine and cold temperate regions;it is common in temperate and tropical regions of the world. It has been collected in Africa, Asia, Australia, Europe, North America,and South America

my first of this kind :) spotted in river Homem félinhos beach,there is another one that is growing on the left side

Thanks very much Gonçalo for the correction,you are rigth,thanks again,i maked the changes allready :)

Youre ID was incorrect. They are very similar, but if you compare, you'll notice that this one is the Astraeus hygrometricus.

Thanks Argy for the comment and for the tip, i'll id him properly tomorrow,today i'am trieing to upload my last "recolt",we continue emerged in fungus :) :)