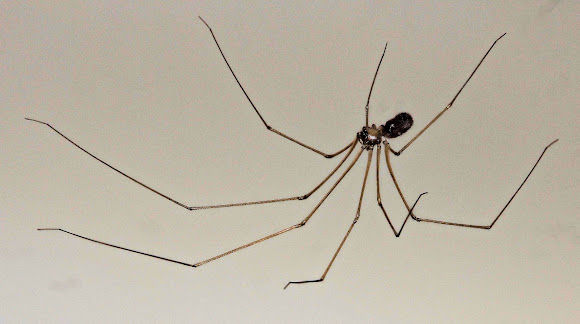 For the past 3 weeks or so, this little fella has been sharing my bathroom with me. He moves around a lot, building a new web almost every day. I haven't tried to take photos of him before because he's really small and he usually builds his webs in hard to reach places, corners of the ceiling, behind the toilet and places like that. When I walked into the bathroom this morning, I noticed he had built a web in the sink and was occupying the center of the sink. So I took a few snapshots of him.

A bathroom the last three weeks or so.

Also called a daddy-long-legs spider, skull spider and simply a cellar spider. The one in my bathroom is not aggressive at all. If you just blow air on him, he will run, deserting his web.

Zack, thanks for your ID. Joe