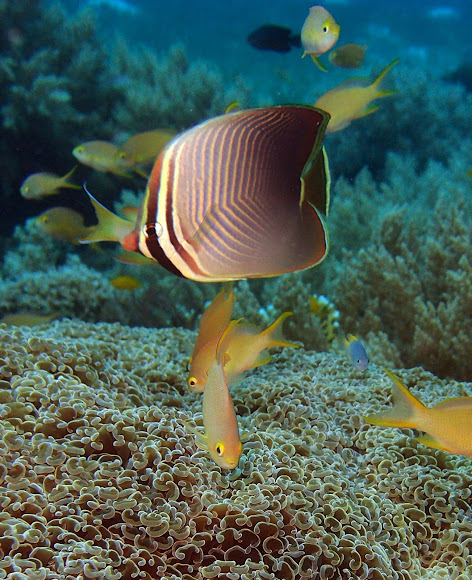 Is a species of butterflyfish (family Chaetodontidae). It grows to a maximum of 16 cm long. The body has a pattern of alternating cream and grey-brown to purple chevron-shaped bars. There are three dark bars on the head, including one running across the eye.

It is found in the Indo-West Pacific region from the Cocos-Keeling Islands and Indonesia in the eastern Indian Ocean to Fiji and Tonga, north to southern Japan, south to New Caledonia and New South Wales in Australia. The Eastern Triangle Butterflyfish is found in seaward and lagoon coral reefs. They usually swim around in pairs and are territorial. This species feeds exclusively on the polyps of the tubular Acropora corals.

thanks for the nice comments. I also particularly like this butterfly fish, is really pretty :-)