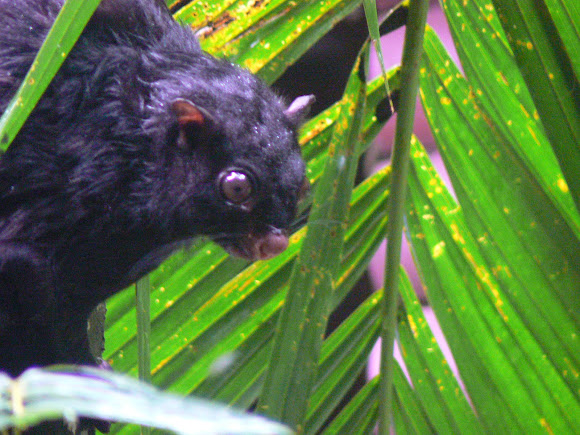 In South Asia, it is a diurnal and arboreal species occasionally feeding on the forest floor. Head and body length varies from 35 to 58 centimetres (14 to 23 in) in length, and the tail is up to 60 centimetres (24 in) long, with an overall length of up to 118 centimetres (46 in). The back, ears and bushy tail are deep brown to black with a lighter buff-colored belly.It is found to occupy tree hollows in mid high canopy (Molur et al. 2005). In Lao PDR, Evans et al. (2000) found this species to be common in evergreen and semi-evergreen broadleaf forest, and rarely present in pine forest. It is found from the plains up to at least 1,400 m (Duckworth et al. 1999). It has been suggested that one of the reasons for low densities of this species in Malaysian tropical rain forest is competition from the great variety of other arboreal vertebrates (such as birds, and especially primates) for food, especially fruits and leaves, which are among the food items preferred by squirrels (Saiful and Nordin 2004). This species feeds on pine cones and oak trees on Java (Boeadi pers. comm.). It is not tolerant of habitat modification, and has a long generation time of eight to nine years, with a litter size of one or two young.

It occurs in tropical and subtropical montane evergreen and dry deciduous forests.

this squirrel was spotted when it was blown out of a treetop nest during a daytime storm. It appears to be almost all black but possibly with some white underneath. possibly a subspecies.