Genera Pepsis and Hemipepsis in the family Pompilidae (spider wasps) 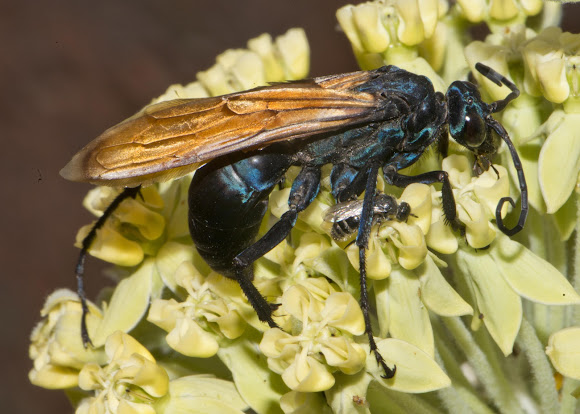 Very large wasp (that pictured is about 2" in length)...making it one of the largest wasps in the US. I believe this one to be a male. It has an iridescent blue-black body with brown wings. It was attracted to desert milkweed plants which are currently in bloom and full of nectar. I initially spotted this wasp as desert milkweed attracts butterflies, hummingbirds (and I as a photographer), and apparently wasps as well.

Spring Valley Ranch in Red Rock Canyon, in the Mojave Desert at the foot of the Spring Mountains.

The desert is famous for a number of creatures which are either poisonous, or fearsome looking. The Tarantula Hawk Spider Wasp is right at home in this group. Its sting is reputed to be among the most painful in North America...a trait I do not care to test. More interestingly (as taken from the attached Wikipedia article) the female tarantula hawk captures, stings, and paralyzes tarantula spiders, then either drags the spider back into her burrow or transports it to a specially prepared nest. A single egg is laid on the spider’s abdomen, and the entrance to the burrow or nest is covered. When the wasp larva hatches, it creates a small hole in the spider's abdomen, then enters and feeds voraciously, avoiding vital organs for as long as possible to keep the spider alive. After several weeks, the larva pupates. Finally, the wasp becomes an adult, and emerges from the spider's abdomen to continue the life cycle. Not something we want to think about at night....