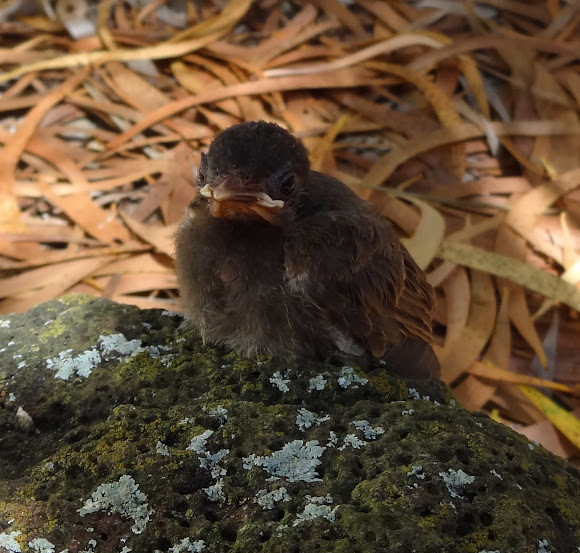 Two adult birds (images 3-6), presumed to be a mating pair, and a pre-fledgling juvenile (images 1-2). The adults were 20-25 cm long including tail. Coloration: crested black head, black beak, gray body, gray tail with white tip, white dorsal patch, red ventral patch, both patches at the base of the tail, and black legs and feet. The juvenile was ~ 8 cm long, well feathered except for its tail, which had not grown in, gray overall with black beak and eyes.

Spotted in and above my back yard. For the third time in less than a month I spotted a juvenile bird in distress. The first two times, I was out in the neighborhood when I found them. This time the bird found me. I was in my back yard and couldn't help but be aware of two adult birds overhead in my koa (Acacia koa) tree, making a racket. This was continuous, sometimes getting louder depending on what I was doing. It took a while, but my brain eventually activated and I wondered if maybe . . . I looked around and voila!, there was the reason for the adults’ agitated behavior, a juvenile bird perched on a rock at the base of the tree. I have no idea how it got there. The leaves of the koa were not densely-packed. I could see through the entire canopy but did not see a nest anywhere overhead whence it could have fallen. However it came to be in my yard, I suspect that the two adults were the parents of the juvenile and had followed it to try to afford it some sort of protection by distracting potential predators. If so, the tactic did not work. Instead, their incessant squawking prompted me to search for the juvenile. The young bird was well feathered, refused a dropper of water which I offered, and fairly mobile. It did not want me to pick it up, but I finally trapped it, to the accompaniment of considerable parental vocalizing, and placed it on the top of the backyard fence. It stayed for about a second, tried to fly off, and immediately disappeared from view. Although the fence prevented me from observing the event, it probably fell about six feet into ground cover while flapping its wings vigorously. The parents followed. Even though it's of an invasive species, I hope the juvenile survives the cats and rats which one occasionally sees in the neighborhood.

It's quite common for older fledglings like this to leave the nest a bit before it can fly. It's too big to fit comfortably, and by then the nest is likely infested with feather lice and feces.

So it will hop/ tumble out to the bushes. Mom and dad know exactly where junior is, as you experienced. They will continue to feed their youngster for a while.