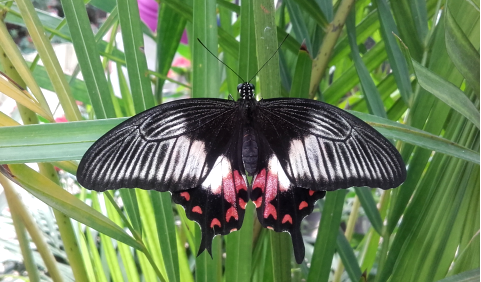 Papilio polytes, the common Mormon, is a common species of swallowtail butterfly widely distributed across Asia. This butterfly is known for the mimicry displayed by the numerous forms of its females which mimic inedible red-bodied swallowtails, such as the common rose and the crimson rose. Jet black butterfly with row of white spots along the middle part of hindwing. 90–100 mm.

The common Mormon is fond of visiting flowers and its long proboscis permits it to feed from flowers having long corollar tubes. It is particularly fond of Lantana, Jatropha, Ixora, and Mussaenda in city gardens. In the forests, the common Mormon remains low keeping within ten feet off the floor and its prefer to visit Asystasia, Peristrophe, and Jasminum for nectar.