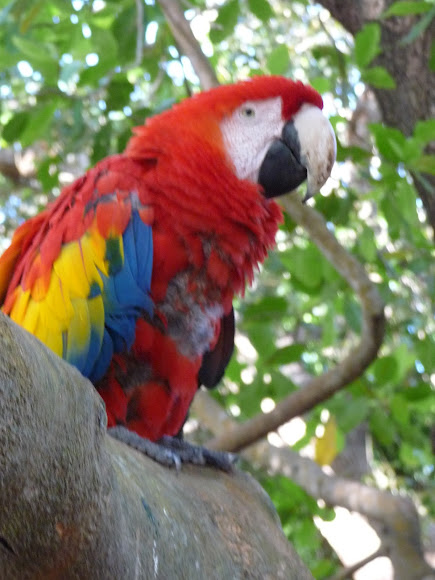 The guide at the nature preserve told us this parrot was about 12 years old.

Conservation status The habitat of Scarlet Macaws is considered to have the greatest latitudinal range for any bird in the genus Ara, as the estimated maximum territorial range covers 6,700,000 km². Nevertheless, the Scarlet Macaw’s habitat is fragmented, and the bird is mostly confined to tiny populations scattered throughout its original range in Middle America.[5] However, as they still occur in large numbers over most of their original range in South America, the species is classified by IUCN as "Least Concern".[1] A pair of Scarlet Macaws at Lowry Park Zoo in Tampa, Florida It is listed on CITES Appendix 1 due to predation for the pet and cage bird trade.[6] Both subspecies are listed by USFWS as endangered. -wikipedia