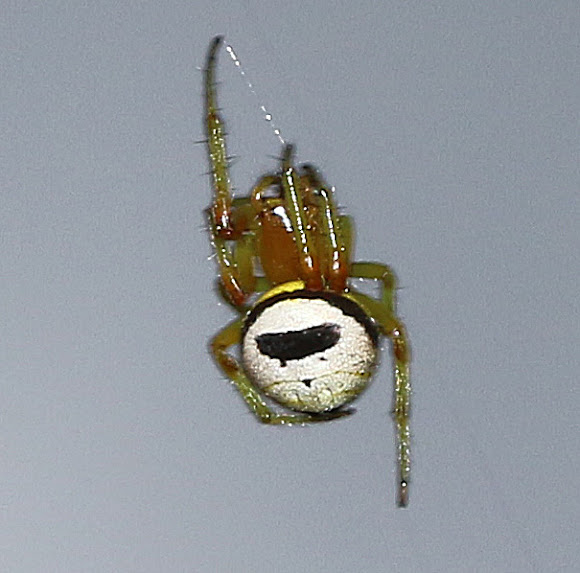 Araneus mitificus are small spiders and exhibit sexual dimorphism. The females grow up to 6 to 9 mm (0.24 to 0.35 in). Males are smaller, reaching only 3 to 5 mm (0.12 to 0.20 in) and are generally less colorful than the females Their abdomens are globular and covered with fine hair. They slope abruptly from the mid-region to the posterior. Two small but distinct tubercles are present at the rear end. The dorsal surface is covered with white and black patterns that can vary considerably. The front edge usually has a wide black band. In the upper center is a characteristic large kidney-shaped marking (which can sometimes be a faint vertical line or V-shaped), from which it derives its common name. Immediately below it are two small but prominent black pits (fovea). At the posterior half is a series of faint transverse ridges. The markings on the back of the spider can resemble a human face if viewed from the front. The ventral side of the abdomen is a uniform green. Wikipedia

This spider was spotted on a bushy plant (which I can't identify) in our front yard. This was my third encounter with this species. So, knowing what was coming, I observed with great interest for some time and soon saw that it was building a web and at the end of this procedure, it constructed a beautiful shelter by bending upwards the edges of a leaf and creating a roof of woven silk. This process and its purpose are described much more eloquently in Wikipedia.

I have come across this species several times in our garden and in foliage along the roadsides throughout our local area. So I can say confidently that Araneus mitificus (Simon, 1886) is alive and well in this part of the Philippines.

John B. 8 months ago

Hi Dawn Lopez-Garanzua, thank you for your comment and please thank your student. Sorry for the delay, I am new on Project Noah and just getting the hang of it. I was delighted to note that you are an educator. Education is not just important, it is EVERYTHING!

My student says she likes your spotting. Thank you for sharing.