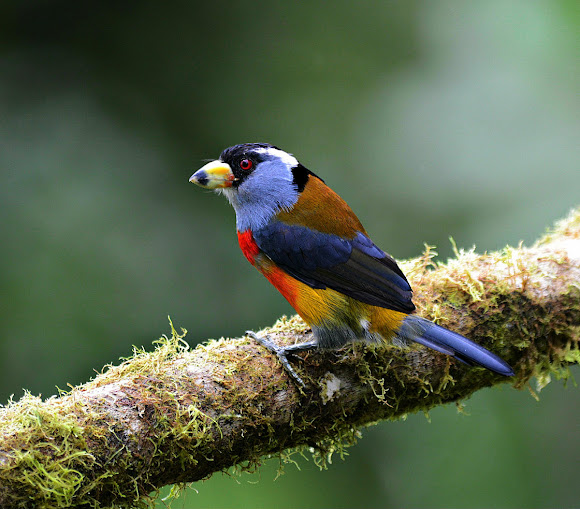 this bird was spotted at the Sachatamia lodge near Mindo. There are seven species of New World Barbets (Capitonidae) that inhabit the Ecuadorian foothills of the Andes. They are considered a distinct family apart from the Old World Barbets and the African Barbets and believed to be more closely associated with the Toucan. They are stocky and colorful birds found in the canopy and humid mountain forest borders, often seen feeding on fruits and berries. Although males and females vary greatly in coloration, the Toucan Barbet is an exception. Barbets build their nests in tree holes and cavities. The Toucan Barbet can be found on the western slopes of the Andes from northwest Ecuador to west Cotopaxi. They normal range is between 1,400 and 2,400 meters (4,400 and 8,000 feet). Although this species appears to be thriving quite well in Ecuador, it was placed on near-threatened status by Collar in 1994 due to its growing scarcity in Columbia. The Toucan Barbet is a brilliantly colored and stout birds measuring 21.5 to 23 cm (8 ½ to 9 inches) in length. The bill is very hefty with a mixture of yellow and pale green tipped with black. Red eyes peer out from behind a black mask that ends at the collar. There is an obvious white stripe behind the eye. A mantle of golden brown descends the back, transforming to a yellow at the rump. The wings and tail are gray. The sides of the neck, throat and chest are a bluish gray, with the breast and mid-belly a vibrant red. The underbelly sports a greenish yellow hue. It is obvious that this little harlequin like bird cannot be mistaken for any other species. The Toucan Barbet is most often seen in pairs or small groups, perching for extended periods on stout horizontal branches. They are sometimes found in groups with tanagers, feeding on fruit in the canopy of mountain forests. When in flight, they beat their wings rapidly making a boisterous racket. It communicates with loud, booming honks: the male and female having different pitches. It also regularly clacks its bill to attract the attention of the opposite sex. The Toucan Barbet can be readily observed at the Bellavista Forest Reserve, Milpe Bird Sanctuary, Mindo Valley, Paz de las Aves, Tinalandia and Tandayapa Valley.

I counted over ten colors in that bird, It's amazing!

Sachatamia lodge:- I highly recommend it...lots of birds and moths as well. you will not be disappointed if you are a bird lover. The birds(enormous varieties) comes early in the morning to feed the insects like beetles and moths that has visited the night before. There was an owl but we could not locate it. We did miss a motmot that came briefly but got scared away with a loud noise made by the bus driver...bummer! thanks for the compliments!

Hi Susan..we stopped by this lodge on our last day in Ecuador (our leader was checking it out for future trips). How was your experience there? It looked very, very nice. The Barbet shot is great!

How colorful, Susan! Congratulations on spotting of the day and a superb spotting of a lovely bird!

Thanks Antonio,
I am trying to learn from the Pros, I have still a long way to go.

Susan :-) WOW,amazing capture,beautiful bird,congrats on the SOTD and thanks for sharing such a amzing spotting page

p.s.lately your shots are just AWESOME :-)

Congratulations on your SOTD Susan. This beautiful bird leaves me lost for words. Well done on your entire collection :)

I was wondering what bird spot of yours would get SOTD. I predicted another one, but I love this one the best for all the beautiful colors. Well-deserved. It is one of my favorite colorful birds from South America. What an adventure you had. I would like to go someday too.

thanks so much for the "congrats" I am very pleased to be able to bring to you a beautiful bird to admire.

I don't get tired looking at and revisiting this spotting.. it's as if Mother Nature got its water colors and started painting.

Congratulations Susan. What a colorful bird!

and 89 other people favorited this spotting