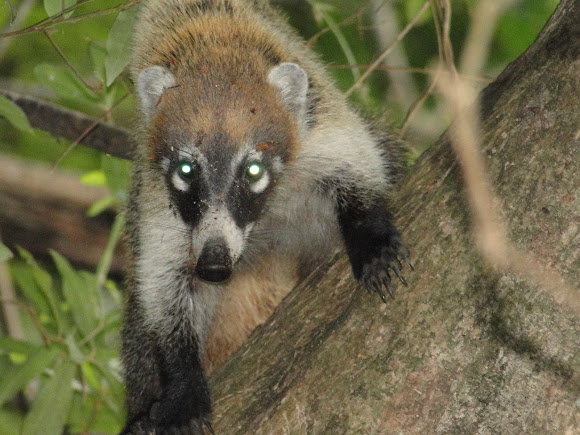 White-nosed Coatis are the most diurnal members of the family Procyonidae. They often sleep curled up in trees, and come down at dawn to forage, rooting with their long, mobile snouts and digging with long, curved claws for insects, larvae, eggs, and small vertebrates. Adult males often live alone, but females and young coatis travel together in bands, vocalizing and grooming each other. They do not hunt cooperatively or share food, but they join forces to defend against male coatis and other intruders. Females raise their young alone, in a nest. Mortality can be high when the young first leave the nest, from predators—including male coatis, big cats, monkeys, and boa constrictors—and accidents and disease.

White-nosed coatis inhabit woodland and open forests. Coatis are rarely seen in open grassland or desert. Their distribution in Arizona and New Mexico corresponds to that of Encinal and Mexican pine-oak woodland. In the southwestern U.S.A., they are found in oak woodlands or hardwood riparian canyons from 1,400-2,300 m. They are also occasionally seen in chaparral conifers. Many sightings have occurred in small isolated mountain ranges such as the Sierra Madre in Mexico and the Chiricahuas and Huachucas in the United States. Coatis are more active by day than by night. They run in bands of up to 30 individuals, although 12 is more typical. Adult males are typically solitary. They are highly adaptable but are basically tropical woodland and forest animals. They frequently climb to obtain fruits, although they are more typically seen on the ground. Their diet is omnivorous, typically consists of fruit and invertebrates (Gompper, 1995; Kaufmann, 1962; Valenzuela, 1998). They search for food both on the ground and in the forest canopy.