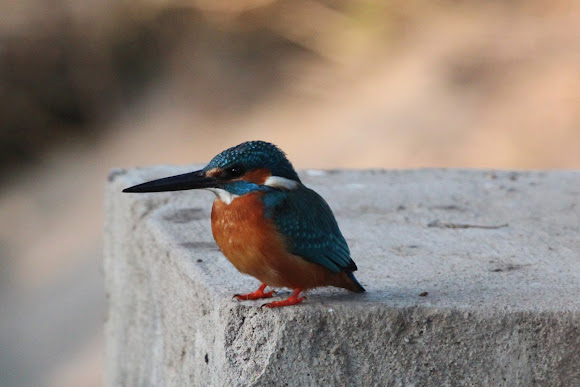 This species has the typical short-tailed, dumpy-bodied large-headed and long-billed kingfisher shape. It has a green-blue neck stripe, white neck blaze and throat, rufous underparts, and a black bill with some red at the base. The legs and feet are bright red. The female is identical in appearance to the male except that her lower mandible is orange-red with a black tip. The juvenile is similar to the adult, but with duller and greener upperparts and paler underparts. Its bill is black, and the legs are also initially black.

Seen at the Thol Bird Sanctuary.

A challenge for any diving bird is the change in refraction between air and water. The eyes of many birds have two foveae (the fovea is the area of the retina the greatest density of light receptors), and a kingfisher is able to switch from the main central fovea to the auxiliary fovea when it enters water; a retinal streak of high receptor density which connects the two foveae allows the image to swing temporally as the bird drops onto the prey. The egg-shaped lens of the eye points towards the auxiliary fovea, enabling the bird to maintain visual acuity underwater. Because of the positions of the foveae, the kingfisher has monocular vision in air, and binocular vision in water. The underwater vision is not as a sharp as in air, but the ability to judge the distance of moving prey is more important than the sharpness of the image. Each cone cell of a bird’s retina contains an oil droplet which may contain carotenoid pigments. These droplets enhance colour vision and reduce glare. Aquatic kingfishers have high numbers of red pigments in their oil droplets; the reason red droplets predominate is not understood, but the droplets may help with the glare or the dispersion of light from particulate matter in the water

Thank you Sandra and Nilima.

this bird name is just common kingfisher but its not common its color beautiful..

Thank you Sachin, Shanna and Telse.

Sweet! Nice Shot.
I am surprised he doesn't fall over. ;)

Thanks Karen and birdlady. Agree with you birdlady, it is the learning part that attracts me to Noah too :-)

Great photo! I also enjoyed the information. Love the learning that we can do on Noah and glad when people include more than just a photo.

Thank you Seema and Leana.

Thank you Jill and Leighannimal.