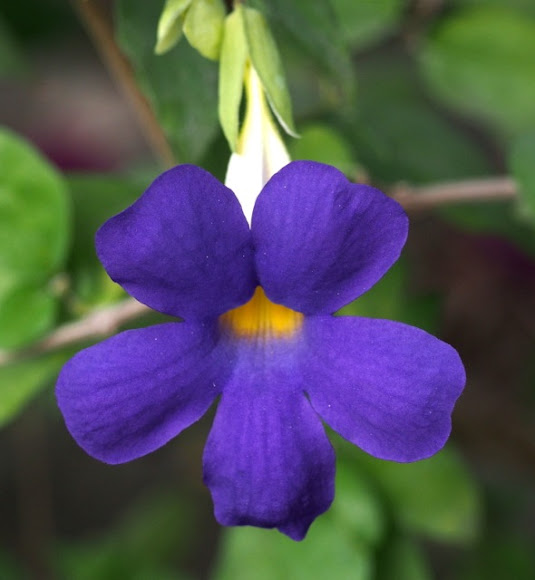 Thunbergia erecta is a herbaceous perennial climbing plant species in the genus Thunbergia native to western Africa. Common names include bush clockvine and king's-mantle. From Wiki... Interesting as it looks like the same flower except that mine grows on a bush and definitely doesn't climb!

thanks Vincent, Ashish and Chief RedEarth for your input into this spotting... Still looking for a definitive ID for this plant, though.

Hmm, just checked the Flowers of India website. This spotting is a small bush growing all by itself in the garden, no vines nearby! And the leaves look different, I think. I'll check them tomorrow in my garden. Thanks Ashish...

Vincent many climbers are mixed with shrubs and big herbs and make you feel flowers of host(supporting of climber) plant. I felt such in many species... Flowers of India website is really a helping and Books of Proff. Shrikant Ingalhalikar... are too.

Pamela I have suggested 2 matching species... Verify yourself which match with your spotted flower structure specially in Petals and Sepals....

thanks Chief RedEarth, but this is different from Bengal Clock Vine http://www.projectnoah.org/spottings/170...
It grows on a small lanky bush, not a vine, and the flowers look quite different in shape and colour.

Dear Chief RedEarth, This is not a vine. It is a bush-type plant seen in plenty here in Palakkad, Kerala.