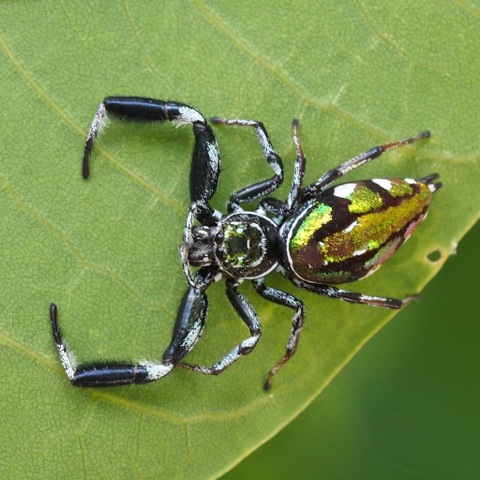 I'll upload the Scorpion spider I found in Costa Rica now, to keep them all together. This little one seemed to take a defensive position whenever I tried to take a face-on photo, with the front legs at right angles in front of it. It caused a bit of excitement on the Jumping Spiders page on FB ! David Hill said "I'm not familiar with this species, but definitely not Paraphidippus aurantius or anything like it. It looks like you have found both a male and a female. I'm confident that this is the dendryphantine (group includes Paraphidippus and Phidippus) Lurio, possibly Lurio solennis, the type species of an unusual group of spiders. The front legs are quite unusual. From what I can find, this genus has never been found outside of South America (Brazil, Venezuela, Guiana). In addition, no one has ever published photographs of the living spiders, which are quite spectacular. This is quite a find. Send me as many photos as you can. If you are interested, we can publish your records and photos in PECKHAMIA. Please send photos on the Costa Rican species also. There is really only one species in Lurio with a reasonable description. There are more described Rudra, which may be related." Dominik Hofer: "David, I just entered this group and missed the whole discussion here, but came to the same ID Lurio sp.., but never have seen a natural picture of it. So Pamela's spider are really spectacular. I am looking forward to get more info from you." David Hill "I can confirm that this is a Lurio, and can be called "Lurio cf. solennis (C. L. Koch 1846)".with confidence. That is actually the only well-described species in the genus, but only from tropical South America previously. These are the first photos that I have seen of living specimens. It's great to see both the male and the female, from two different countries. There is really a considerably difference in body proportions between Lurio and either Parnaenus or Paraphidippus (also tropical dendryphantines), and the most obvious difference is in the length of the legs of Lurio, and the way that they are held in a "right angle" shape (suggesting a scorpion) in front of the spider. There are a lot of other differences at a detailed level. Thank you, Pamela! So now people who have studied the neotropical Dendryphantinae (G. B. Edwards, G. Ruiz) are comfortable with the identification of Lurio when a spider is close to L. solennis as figured by Crane." Xacir Deric "Prof. David whats is the main difference between Lurio and Parnaenus? Prosoma shape?" David Hill "Parnaenus can be very similar to Paraphidippus. Note the more complex pattern of white scales on the female Lurio, the more elongate form of both sexes, but most of all the unusual size and position of legs I. The common name "Scorpion Spider" is quite appropriate for this Lurio." I saw 2 more, a male and a female in Nicaragua, Ometepe Island. http://www.projectnoah.org/spottings/175... http://www.projectnoah.org/spottings/174...

Cahuita N.P. A strip of coastal park on the Caribbean side of Costa Rica. Seen a few meters from the beach along a path that runs parallel to the beach.

There has been a whole debate about this little spider by the arachnodolists. This is the result... "I have confirmed that this can be called Lurio cf. solennis by our top experts on the dendryphantine salticids, Drs. G.B. Edwards and G. Ruiz. The "cf." just means that we don't have specimens to confirm the identity, but it looks like this species from photographs. This species has been found in Costa Rica in a recent survey there, but the results of that survey have not been published, so these will be the first records of the species in Central America." David Hill

thanks Mark... just got back to internet-land in Belize.

Hi Diaz. I recommend that you post this to the facebook group, Jumping Spiders. That's where I got mine ID'd. You would have to join first, but it's a great, really active, site.
https://www.facebook.com/groups/salticid...

Hi! could this one be a scorpion spider as well?
http://www.projectnoah.org/spottings/270...

thanks Fyn. This little one is worth the nomination I think !

Great find and shots Pam! Thanks.

nice series, pam! One of your best so far!

Please, Pam, add the other pictures/links from Nicaragua, including the discussion of facebook about the development of the ID in the description as well. Would be very interesting, since there are the only reports from Central America until now. Thanks!! That was a real exciting story!!

I had no idea! Congrats!

Karen, did you see that I have the male also...
http://www.projectnoah.org/spottings/175...

Thanks Karen. Did you know that this is the first time this one has been photographed in Central America?