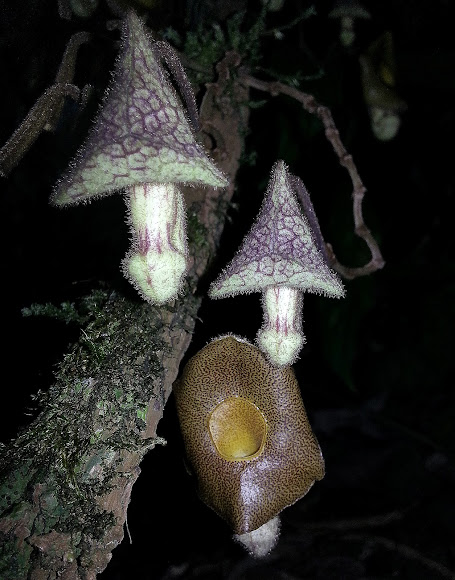 Flower: The thin flower stalks rise from the main trunk of the vine, divide into two or more, form tubular fleshy parts which end in brownish yellow lips of the flower. Roughly pentagonal shaped, diameter: 2-3cm. From the side it appears like a saxophone ('Frenchman's pipe'). Buds stand out prominantly. They're hairy, folded into a triangle, pointing upwards, and whitish green, with purple veination. Frontal view is that of a bell. Leaves: Green on the front surface and faded appearance on the back; 9-12cm long, 6-8cm wide. NB: Side of a flower bud and part of the front of leaves can be seen on pic.no.2, and back on pic. no.4. Stem: Woody, it's a climbing vine, seen spread out among bushes in 3-4m diameter.

Warm to hot climate, bushy and shady side of River Sipla, near its conluence with Subansiri, Arunachal Pradesh. Spotted among the bush in the picture no.5, which's on the left side of the River Sipla (shady side). This river joins Subansiri some 100m down the stream.

On the morning of the final day, (day-5 of our 'rafting-angling-photography expedition' along Subansiri River), seniors were advised to avoid a stretch of dangerous river rapids, instead wade through the smaller River Sipla and join the rafts further down the river. While scrambling through the thick and difficult bush, I stumbled upon these beautiful flowers. And I'd like to share with you this strange, rare and beautiful flower in a remote jungle in Arunachal Pradesh.

Here is a link to your spotting on Facebook Namgyal https://www.facebook.com/projectnoah/pho...
We post directly to our timeline initially because that way the posts get more exposure due to some peculiarity with the Facebook algorithm. After a day or so, the photos are moved to the appropriate albums so that they can be found without having to scroll through the newsfeed. If you share a post while it is on the timeline it will not be affected once we move it to an album.

Dear Karen, Aristolochia post is no more on pn facebook. What could be the reason? I want to share with others so prefer it to be on the timeline. Thanks.

It may simply be a technical glitch or a setting with the page. I can only advise you again to contact Karen to find out what may have happened.

Whatever may be the reason, it's an immature and discouraging one at that! Not going to appeal to any one. Thanks Daniele, Hema and others for the concern.

Could be that there was a controversy on the Identification.

that is a good idea.

Hema, all Spotting of the Day and Spotting of the Week are archived in albums and can be browsed there at any stage. However the original entry remains on the feed and can be seen if you scroll down. For reasons unknown to me this one indeed seems to have disappeared from the feed. As I don't have admin rights on this page, I'm suggesting Dr. Sherpa contacts Karen to find out what may have happened.

I guess the idea is to keep them moving while adding new SOTD's. Considering the amount of news pouring in ,it is very soon that you are off the main page.Happens to all of us.

Thanks Daniele, but I request you to keep it in the main page.

My Aristolochia is removed from projectnoah facebook page, any idea? Pl note DanielePralong.

I commented on this a week ago, but I forgot to add that the last shot is amazing. At first glance, many people would hardly believe that this is India!

Thank you DrNamgyalT.Sherpa, great additional notes and habitat pictures. I hope it helps!

Thanks medusasnakes123, Mark, Harsha and Lauren for the comments.

Congratulations! This is an amazing plant and beautiful photographs.

That is amazing! Congrats!

Congrats on Spotting Of The Day! I can see why they chose this, it the most amazing flower ever! :)

Thanks every one, and Project Noah Rangers, for recommending it as the SOTW. Appreciate all the friends who took the trouble of taking a second look at this 'strange' wild flower and ticking the 'favourite' box. Felt really happy and honoured! Thanks Karen for the good news, and thanks Daniele for all the effort! Will make edits asap.