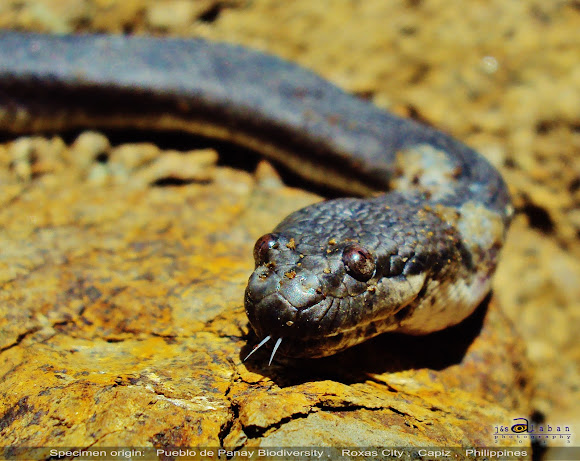 The New Guinea bockadam or dog-faced water snake, Cerberus rynchops, is a species of a colubrid snake found in coastal waters of Asia and Australia. C. rynchops is commonly found in mangroves, mudflats, streams, ponds, tidal pools, on algae patches, and has even been found burrowing into the mud. C. rynchops is rear-fanged and is mildly venomous. An aquatic and nocturnal snake, it feeds mainly on fish and is known to consume eels. In captivity, it is observed to move in a sidewinding direction on land. It also has a prehensile tail that would suggest it could climb mangrove trees. It is now known to give birth to live young, numbering from 8 to 30, either in water or on land. It is a quite docile, mild-tempered and a hardy snake; in recent years it has become a welcome addition to snake hobbyists in the Philippines. It also owes its popularity to its bright yellow to orange belly coloring, mostly of females.

Nice spot! Thanks for sharing.

Thanks Kuya Jolly and Riekos. Only then I've known it can be a good pet. Takes just 4 days to tame it.

Nice spotting. I have one too eating a fish. http://www.projectnoah.org/spottings/176...

I never heard of "dog faced watere snake" before. Thank you very much for sharing. And Happy Chinese New Year to those who cerebrate this day.

Thanks ChiefRedEarth for sharing my greetings.