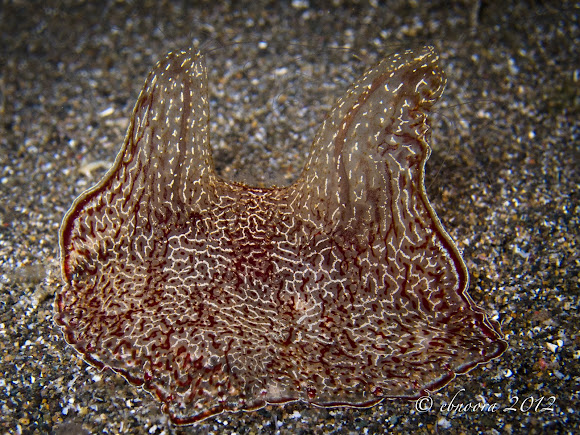 About 10 cm long. Flat with reddish-brown and white markings all over. Two ear-like protrusions with hair-like filaments/tentacles on top, in the middle of the body. Crawling on the sand.

Initially thought this was a flatworm. Only got to take a closer look after the dive and realized it was not. Only with the help of an fb forum was I able to get an ID and was forwarded to the link below: "Ctenophores, commonly called Comb Jellies or Sea Gooseberries, were previously considered to be Cnidarians, because like jelly fish and sea anemones, ctenophores also have nematocysts. Today they are considered to represent a separate Phylum, the Ctenophora. Most are pelagic animals, spherical in shape, which swim by bands of large beating cilia, arranged in vertical rows, each band being likened to comb, hence the name "Comb Jelly". The 'jelly' is a reference to Jelly Fish. Ctenophores catch their prey by everting two groups of stinging and sticky tentacles. There are however a small group of ctenophores [Platyctenida] which have evolved into benthic 'slugs'. At first glance they are usually considered to be flatworms, but if you look at them carefully you will find a pair of pores or swellings which indicate the chambers in which are stored the stinging tentacles. Quite often found on soft corals, like acoel flatworms, there are only a few described species, but probably many yet to be recognised. Most are less than 10-15mm long." Source: http://www.seaslugforum.net/find/ctenoph... Night Dive at a depth of about 4.5 m. Anilao Pier, Batangas, Philippines

Love your spotting.. diving in the night even if it is 4 meter down, to me it would be so scary!! Thank you for sharing an experience that I would NOT ever be able to do!!.... : o

Thank you too Gilma for appreciating. Glad to share the underwater world to everyone. Hope someday you can view them with your own eyes and really get to see the true beauty under. Cheers! :-)

Eric Noora, thank you for sharing this fantastic pictures. There is a huge world under water and your pictures are widening my world. I never really paid much attention to them until now.

Thanks Maria. My first time to spot one and knew had to share it here. Unfortunately not much more info around the web on this :-)

Very cool, Eric. Looks like it is the first spotting of this one on Noah - congratulations!