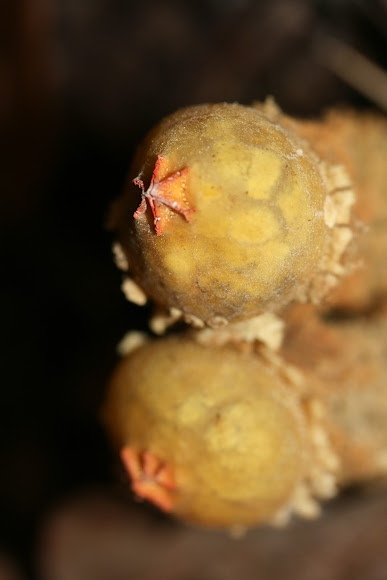 2 gasterocarps consisting of spherical gleba (spore sacs) covered in a yellow peridium atop tall golden stalks of intertwined hyphae that look similar to pasta or spaghetti squash. At the apex of each gleba are pink to red star-shaped pores. Spores are white to gray. Calostoma lutescens is one of the 20 gasteroid fungi belonging to the suborder Sclerodermatineae within the order Boletales. It is believed that fungi within the Calostoma genus underwent diversification within the Boletales order from end of the Cretaceous period through the middle of the Cenozoic era. C. lutescens is ectomycorrhizal with Quercus (oak) species.

Thank you, António!! I thought they were very interesting!