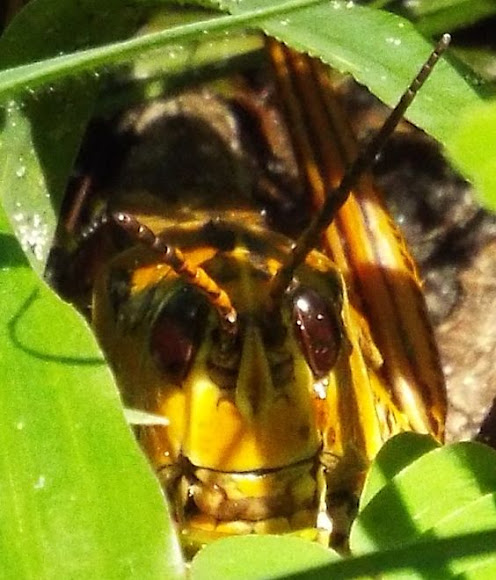 I was squatting taking a picture of the moth in the other picture and all of the sudden the camera strap on the back of my neck started feeling very strange! Something had grabbed me and was scratching me! I thought, "This camera strap sure feels strange!" Feeling that I was in danger, all I could do was grab it and well, throw it to the ground! I looked and saw this Lubber Grasshopper! I received a puncture wound in my index finger. Later, I read that the grasshopper is toxic to other animals, but not to humans! I was worried until I read that! I also read that they are the largest grasshopper of Florida at up to 3", and that they don't fly well because their wings are short and that they can only jump short distances. So I was amazed that it could jump onto the back of my neck! That being said, they sure are beautiful. I first saw these earlier in the year in a younger stage when they are a pretty black with a yellow stripe running down the middle, but missed the shot. Later I got a second chance! That is what is so nice is that it is like we get two-in-one because of the different looks!