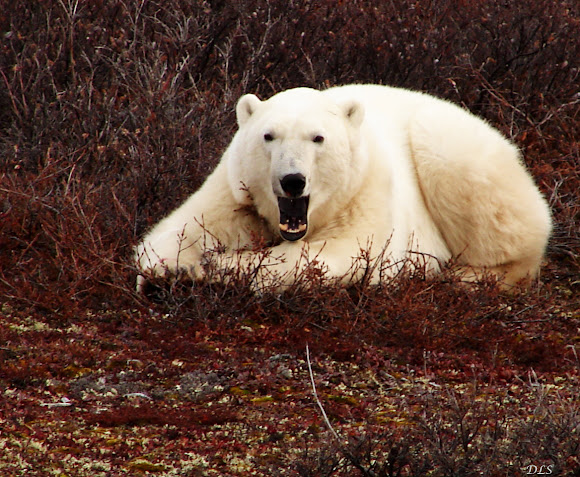 Happy International Polar Bear Day to all my friends here on Project Noah!

These brilliant bears were seen in Churchill, Manitoba just near the Hudson Bay in Canadas Arctic circle which is an amazing place, although the winter snow was late this year and it did seem odd seeing Polar Bears but no snow! The polar bear is found in the Arctic Circle and adjacent land masses as far south as Newfoundland Island. Due to the absence of human development in its remote habitat, it retains more of its original range than any other extant carnivore.While they are rare north of 88°, there is evidence that they range all the way across the Arctic, and as far south as James Bay in Canada.

These photos are a mix of Male bears and Females with their cubs, most of the cubs were between 2 and 3 years old that we saw. The black on the male bears back is hair dye which they use to track the bears as this doesnt wash out of their fur very readily and can be seen easily from high up.

Awesome photos and some nice info. I'd love to see these in the wild one day.

Thanks for the love on one of my older spottings Mona :-) and Kranti this was indeed on the edge of Hudson Bay although it did seem a little weird there not being any snow around yet! We only had a couple of days here as we went on to Toronto from Churchill but it is a really amazing place, especially when the northern lights show themselves too!!

Stunning series !! Hope to watch them someday in Hudson Bay

Very cool... they are amazing..

Hi Sandra, thank you very much, Lucy we were out on huge tundra buggies which are converted army trucks with monster wheels to cope with the terrain and had to stay a certain distance from them but as they are naturally inquisitive they would often walk. right up to the vehicle to investigate, in case its edible which is another reason for being so high off the tundra!!'

Wow, so cool!! Were you close to the polar bears?

Hi Carol, I really appreciate you taking time to comment and like so many of my spottings. Thankyou!