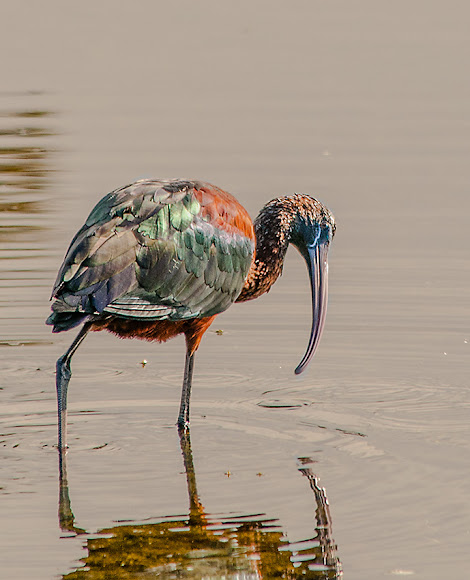 The Glossy is a medium-sized, dark wading bird with a long, slightly curved bill. It weighs about 1.2 pounds and measure 23 inches, with a 36-inch wingspan. While it can appear very dark, it is actually a very colorful bird, especially when the light catches the vibrant green, purple and teal feathers on it's back and wings. The feathers on its breast and neck are brownish to reddish. During breeding season it appears more reddish and vibrant, with a light blue line around it's face.

Found along the east coast from Maine to Florida and the Gulf Coast to Texas. It is also found in Central and South America, Africa and other continents. It feeds in marshes, estuaries, coastal bays and other wetlands. It can often be seen feeding with white ibis or it's close cousin, the white-faced ibis. The white-faced ibis looks very similar, but has a red eye and is not as common.

Landmark, this bird was spotted in Florida and it seems your mission is for the North Eastern states. Thanks for the invite though.

would you consider adding this to http://www.projectnoah.org/missions/1960...
thanks!

Beautiful photos!! Congratulations on your win.

WOW! These color combinations are spectacular! Congratulations on National Geographic spotting of the week! Welcome to Project Noah!

That is the neatest description so far Punkus. Like it!

Congrats! That's a great bird. Never heard of it before I saw these pics.

Great capture Donna,congrats om the National Geographic spotting of the week and thanks for sharing

What amazing plumage! Congratulations to you Donna!

Need to observe again and again to check which shade of Rainbow is missing in this beauty's plumage..... Always love to see them within water...... beautiful spotting...

Great Photies, Im yet to see my first one, nicely done!

I love all the photos, but the third photo with the large water droplet on the beak is really cool!

Fantastic news about your National Geographic recognition. WOW! I saw this bird the other day. Very impressive. Congratulations.

Congratulations for this wonderful achievement.

and 66 other people favorited this spotting