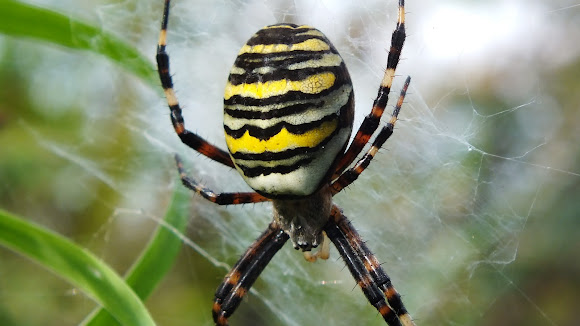 The common name of this beautiful spider is wasp spider. This spider is, like all orb-weavers, not poisonous for us. The spider prefers to weave her web between grass at a height of 20 -30 cm The adult female has a shining silvery cephalothorax and a yellowish abdomen with black and white bars across it. The adult female is much larger than the male. The male measures between 4 and 6 mm while the female has a full grown size between 14 - 17 mm. When the female is loaded with eggs she can become enormous in size. In July the males mate with the females and often loose their life or some legs after their 'duty'. The female makes a brown cocoon one month after mating and the young spiders hatch the next year in spring. The female dies in the winter. When the spiders are young the differences between the sexes is not so obvious. But the sexes can be identified by the form of the palps. Like all spiders, the palps of the male are bulbier than the palps of the female. When the spider catches its prey it wraps it very fast in silk. After a lethal bite with venom and protein dissolving enzymes it waits until the prey does not struggle anymore and sucks it empty or hangs the packet in its web to consume it later. If a too large insect gets into its web it bites the threads in which the insect hangs loose of its web until the insect falls out.

The spider lives in open grassy areas and makes its web amongst the grass and low herbage.

My first encounter with this beautiful species of spiders and definitely the spider with the largest abdomen I've seen in Holland in the wild. Female wasp spider spotted in rural area of Twello, Holland. (sources:see reference)